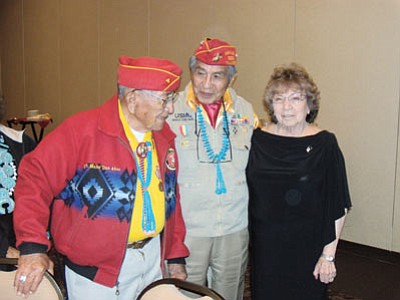 Navajo Code Talkers Dan Akee and Peter Mac Donald, Sr., along with Mac Donald's wife Wanda, share a couple of light moments at the Marine Corps Birthday Ball in Flagstaff last week. Mac Donald, president of the Navajo Code Talkers Association, was the guest speaker for the occasion that paid tribute to the service of Marines and other veterans in the community. Navajo Code Talkers distinguished themselves as radiomen during some of the bloodiest battles on the Pacific front during World War II. A communications code, developed with the Navajo language, was never broken by the enemy and helped bring a successful end to the war. Mac Donald's historical rendition of their exploits was well received by all.