Car club cleans up on Highway 87 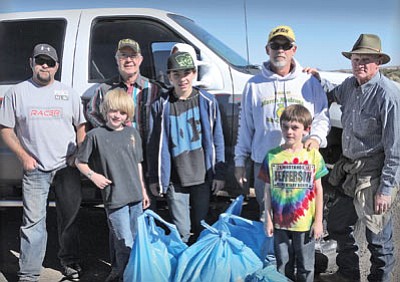 Winslow's Just Cruis'n Car Club picked up trash on Highway 87 between mile posts 313 and 314, south of I-40 Nov. 24 near the turn off to the climbing areas of Jacks Canyon.

The club cleans the roadway multiple times a year, according to the Arizona Department of Transportation's (ADOT) rules for roadway sponsoship.

During the cleaning expedition, club members filled four heavy-duty ADOT bags with a variety of wrappers, containers and tire treads. Only one thing of questionable value was found - a lightly gnawed on hard ball.

The Just Cruis'n Car Club promotes the welfare of Winslow in a number of ways. Every year at about this time, the club donates a dozen turkeys to the Elk's Christmas food baskets. In the spring, the car club gives a $500 scholarship to a deserving Winslow High School senior.

Most recently, Just Cruis 'n gave financial aid to the Santa Fe Railroad All Indian Band Reunion, helping to bring together various tribal members for the first time in 43 years. The club has about 25 members with modest $25 annual dues. They meet on the first Tuesday of each month at BoJo's Café in downtown Winslow.