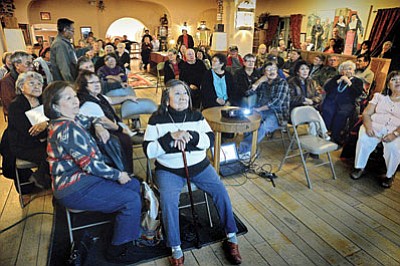 The Historic Santa Fe Railroad All Indian Band founded on the banks of Clear Creek in 1923 was reunited in Winslow on Nov. 16. This was their first reunion in 49 years and was held in the La Posada Hotel Ballroom. Surviving members, and relatives of original band members numbered about 40. They gathered in the ballroom and recounted stories of their band involvement, its impact on their lives and fond memories of friends and relatives who have passed away. There was time also for the surviving band members to provide recorded oral histories of their lives and band activities in years past.

Ken Evans II was the inspiration for this event as well as the main organizer. Winslow's Old Trails Museum was a participant as was Allan Affeldt of the La Posada Hotel. Other Winslow organizations contributed funds to support the reunion and make it possible for a historic gathering.