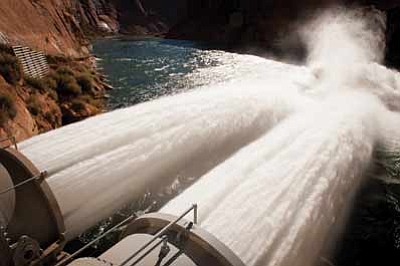 The protocol allows for more frequent HFE releases to be conducted when the right conditions exist, through the year 2020. The goal is to determine the effectiveness of multiple HFE releases in rebuilding and conserving sandbars, beaches and associated backwater habitats that have been lost or depleted since the dam's construction and operation.

The up-ramp to power plant capacity began at 11 p.m. Nov. 18, and throughout this week about five times more water than normal will be ultimately released out of the dam. Bypass tubes opened at noon on Monday and will close at 7 p.m. on Friday.

Total duration of the HFE will be five days, with one of those days at peak release. Flows are expected to return to normal by Friday night.

It took about 16 hours for the water to reach Phantom Ranch, and nearly two days for it to reach the end of the Grand Canyon at Pearce Ferry. Officials expect Lake Powell's water level to decrease by 2 and a 1/2 feet.

The last time the Bureau of Reclamation opened up the bypass valves on Glen Canyon was 2008 in an attempt to redistribute sand in Marble Canyon and Grand Canyon. Most of the sand that once flowed into the canyon is now trapped upstream of Glen Canyon Dam.

Department of Energy officials decided in May to flood the canyon more often - possibly once or twice a year following snowmelt and the monsoon season.

With the construction of Glen Canyon Dam, seasonal flooding that once moved sand from the riverbed to the shoreline no longer occurs. Because more than 90 percent of the sediment that historically moved through the Grand Canyon is trapped behind the dam, the primary sources of new sand to the river system are two downstream tributaries: the Paria and Little Colorado Rivers.

The Operation of Glen Canyon Dam Final Environmental Impact Statement, completed in March 1995, hypothesized that controlled high volume releases of water could be important for restoring ecological integrity downstream from the dam.

Such flows would also be consistent with the objectives of the 1992 Grand Canyon Protection Act, which states that Glen Canyon Dam should be operated in such a manner to protect Grand Canyon National Park.

Building on the results of prior high flows, the 10-year protocol for HFEs (between 2011 - 2020) takes a multi-year, multi-experimental approach to using short-duration, controlled high volume releases from the dam during sediment enriched conditions in the downstream channel.

Understanding the complexities of the interrelated ecosystem downstream of Glen Canyon Dam is a long-term challenge. The adaptive management model, which emphasizes an on-going cycle of learning through experimentation, refinement, and improvement over time, provides the appropriate framework to achieve this understanding.

Through the Glen Canyon Dam Adaptive Management Program, continued implementation of HFEs as a key operational strategy will yield invaluable knowledge about the response of, and benefit to downstream resources.

The total combined capacity of the eight hydroelectric power plant generators is 32,000 cfs (cubic feet per second). The ability to release this volume of water depends on the reservoir level and the full operability of each unit. The total combined capacity of the four river outlet tubes is 15,000 cfs. Because water released through the river outlet tubes bypasses the power plant, it does not generate hydropower.