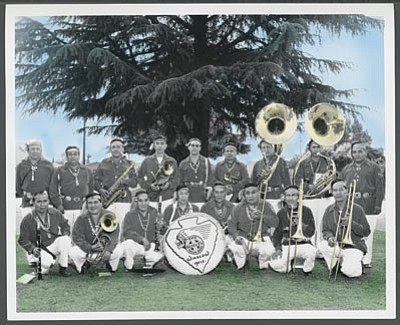 For the first time in 49 years, the historic Santa Fe All Indian Marching Band will reunite and walk in the city of Winslow's annual Christmas Parade Saturday at 1 p.m.

The Winslow Chamber of Commerce and the city of Winslow present the 67th annual Christmas Parade which makes its way down parts of Historic Route 66. Second and Third Streets will be closed for the parade.

By 1948, during the height of the group's popularity, the band had traveled more than 10,000 miles performing at a number of functions across the country, including President Dwight Eisenhower's inaugural parade.

Kenn Evans, Homolovi State Park ranger and chairman of the city of Winslow's Historic Preservation Commission, organized the reunion of 24 former members of the Santa Fe All Indian Marching Band. He said the band was so professional and highly regarded at their peak that they had to hold auditions to add new members.

"On Oct. 26, 1963 the band had their final dinner and disbanded because they could no longer find enough qualified musicians to play in the band," said Evans. "After 40 years of being a band and 35 years traveling the country, they took the band on the road in 1928, they had to call it quits."

It took almost a year for Evans to put the reunion together. He tracked down band members from California, Florida, New Mexico, Colorado, Arizona and more.

"November is Native American Heritage Month, and this is Arizona's centennial year, so I thought it would be the perfect time and place to reunite this great all Indian marching band," Evans said. "The band members are coming from all over the United States."

Evans said band members will arrive in Winslow Friday and go on a driving tour around town. Later in the day, the Harvey Girls at the La Posada Hotel will provide a guided walking tour to band members. After the band members eat dinner, a reception open to the public takes place Friday from 7-9 p.m. at the Grand Ballroom in La Posada.

"[Saturday] they'll be on a float in the parade with a tribute band following them playing some of their classic music," said Evans. "After the parade, we're all meeting in the front room at the Hubbell Trading Post, where we will exchange addresses and numbers to try to stay in contact."

Winslow's annual Christmas parade is one of the largest in all of northern Arizona, drawing residents and guests from all around the state. Up to 10,000 people have attended the event in past years.

Hall said the chamber appreciates the participation of businesses, clubs, organizations, churches, schools and dignitaries that enter floats into the parade. Many use their entry as a way to advertise or promote their business while at the same time thanking the community for any support given to them in the past year.

Many parade entries are from other communities outside Winslow as well.

Santa Claus visits from 9:30 a.m. - noon on parade day. Children of all ages can meet with him at the Winslow Visitor Center at 523 W. Second St. to receive a "goodie bag" and tell him what's on their Christmas wish lists.

The Winslow Chamber of Commerce began sponsoring the parade in 1946 as an event to kick off the holiday season.