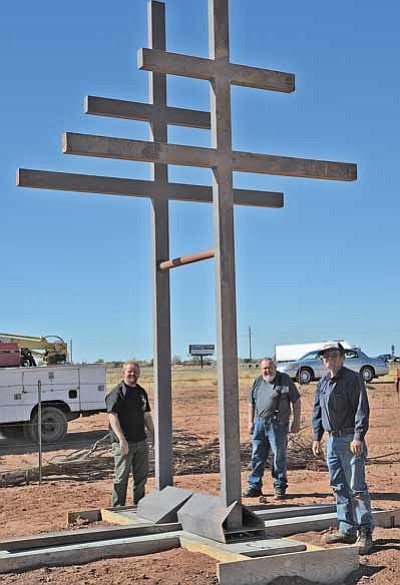 Ken Evans, Ken Evans II, Jim Pate and Russ Hamilton erected a special marker at the Winslow Indian Sanitarium Cemetery Oct. 30. The cemetery marker is a double set of Crosses of Loraine, a modification of the ancient Cross of Lorraine. Used during the First Crusade in 1099, the cross became the official symbol of the anti-tuberculosis "crusade" in 1920.

After the United States Department of Interior transferred the hospital to the Bureau of Indian Affairs, it was called the Indian Hospital. The old cemetery is located next to eastbound I-40 about two-thirds of a mile east of exit 252 in Winslow. The cemetery looks like a fenced dirt field, but now it is memorialized with the two Crosses of Loraine standing about 15 feet high.

The government used the location as a burial site because it was not practical to contact surviving family members throughout the vast reservations of Arizona and New Mexico. The Winslow Historic Preservation Commission is analyzing the site for preservation and documentation. Ken Evans is the commission's president. He has worked for many years documenting Winslow's unmarked cemeteries.

Gail Sadler is conducting the analysis and documentation. She has researched death certificates lodged in the Navajo County Records Office and has documented 533 individuals interred at the Sanatorium Cemetery between 1933 and 1977. The Winslow Historic Preservation Commission will continue documenting the Sanatorium Cemetery and raising money to build protective walls for the site to dignify the resting place of the individuals located there.