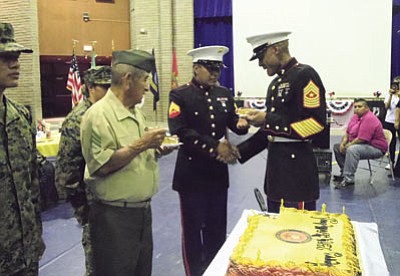 Never before had there been so many memorable activities on the Hopi reservation honoring and celebrating local veterans for their commitment to service, loyalty to the country's safety, deep abiding commitment to protection of their families and homelands and deep reverence for their freedom and way of life as Native veterans who sacrificed personally to serve their country.

Rod Sepulveda, who serves as a rural health coordinator with the Prescott VA Medical Center delivered a sveterans address to the capacity crowd. Sepulveda is working toward getting specialized and essential services for all military personnel out to the Hopi reservation, saving many veterans the time and expense of having to travel to metropolitan areas like Prescott or Phoenix for counseling, medical, emotional or benefit services.

Masters of Ceremonies Bruce Talawyma and Yvonne McCosar allowed time for an "open mike" session for veterans to share special personal memories of their time in military service and also recognized all Gold and Blue Star mothers during the day-long ceremony.

Hopi Tribal offices of the Hopi chairman and vice chairman issued good wishes and appreciation to the veterans at the event.

Numerous volunteers, headed up by Diane Lucero who runs the Kykotsmovi Elderly Center, served a turkey dinner with all the trimmings. Lucero could be seen for three solid days wearing an apron tirelessly as her "badge of honor" to help coordinate the three major meals that were served during the week's events to all the veterans, their families, friends and supporters. Lucero was assisted by Hopi Cultural Center staffers, chefs, volunteer servers and wives of the veterans who were being honored.

Local Hopi country western bands, SunFire and Desert Country, provided musical entertainment to honor the veterans for their commitment to their country.

Most of the items were brand new including zero weather sleeping bags, wool coats, brand new boots and personal items, military grade backpacks and sweatshirts and pants. Tenakhongva made it a point to sort all the items evenly, so that each veteran who was in the receiving line would receive something from the Washington D.C. surplus office.