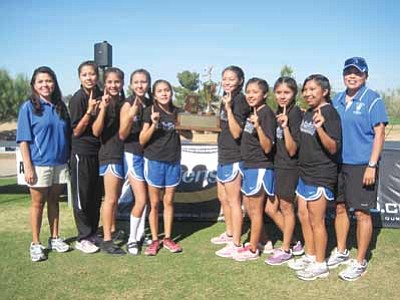 Billy, a 16-year-old junior, said she was proud and relieved that Hopi won another state championship.

"Our division was more competitive than last year," she said. "We ran a great race. I liked the course because it combined hills, pavement and grass all in one race."

Billy said she ran a competitive race because she didn't let the heat get to her. She said the key to her team's win was running as a pack. Billy said the Lady Bruins will start training in the off-season for next year as they look toward a great season and another state title.

"The course was intense and hot, but I managed to finish," she said.

Ben said the key to winning was teamwork and determination. She will play basketball, run track and run during the summer to prepare for next season. She said the outlook for success is good for next year with six returning runners.

Lomayestewa, a 16-year-old junior, said she initially heard Hopi came in second and was upset because she felt it was her fault if the Lady Bruins didn't come in first.

"I was very upset and my brother was trying to calm me down," she said. "When he finally did, he told me that we got it and I was just relieved. The course was different this year because it had a hill. We ran a magnificent race, but I knew it wasn't my best."

Lomayestewa said it was a competitive race because Pusch Ridge was gunning for Hopi.

"But in the end, we won. The key to winning was running as a team and not giving up," she said.

Nikesha Eagleman, a freshman from Ganado, was the individual state champ finishing in 19:20, well ahead of Pusch Ridge's Sarah MacDonald who took second place.

Hopi High coach Laverne Lomakema said it felt great to win another state title. She said each of Hopi High's state championship teams have been different with unique chemistry.

"It helped to have four returners. We always have to be confident, but there was tough competition this year," she said.

Lomakema said the Hopi High girls ran to their potential and the top five tried hard to keep up with last year's state champion and pushed it toward the end. The coach noted that Christen Ben missed most of October with a leg injury, but came back for sectionals and ran an excellent race at state.

"We're looking to come back again next year," she said. "We have a good bunch of JV runners. We're going to train during the summer, but right now we want to enjoy this."

Fan support at the meet was incredible.

"The fan support was great. There were so many Hopi fans. We really appreciate it. The girls fed off the fan support," she said. "The school staff and the parents make a world of difference."

Claryn Josytewa, a 17-year-old junior, said her emotions ran high after the race.

"I was glad all the hard work during the season paid off," she said. "We had three first-time state runners. One freshman. A senior joined for the first time and a junior who went as alternate the past two years."

Josytewa said it was hard to adjust to the heat but she toughened up so the team could win another state title.

Natasha Richardson, a 17-year-old senior, said she felt a sense of accomplishment after Hopi High won yet another title.

"This was my first and last year running," she said. "Hopi ran an excellent race. The heat wasn't as bad as I thought it was going to be."

Richardson said the race was competitive.

"Every team wanted the gold medal, but we wanted it more," she said. "The key to winning this year was not giving up, giving it our best and crossing the finish line with nothing left."

Jennifer Lomayaktewa, a 17-year-old junior, said she was ecstatic about the Lady Bruins win. It was her first year running at the state level. She was an alternate the past two years.

"I liked the course. It was challenging because of the hills. I ran well. I stayed hydrated during the week," she said. "The race was tough, hot and fast. The key to winning was to keep focused."

ThaRae Day, a 14-year-old freshman, said her coach pushed her harder this year than last year.