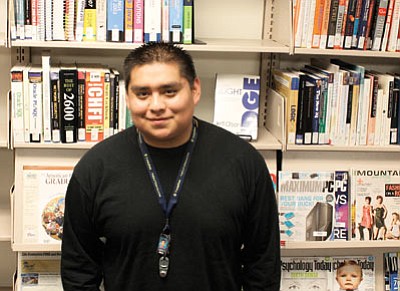 Kyle Nez stands in the library at the CollegeAmerica Flagstaff campus. Dave Yankus/WGCN

Unfortunately, Nez dropped out of high school seven years ago when he was in the ninth grade. He was 15 and just had a baby.

Originally from Chinle, Ariz., Nez moved to Phoenix at the age of 16 with his former father-in-law but could only manage to find minimum wage jobs to support himself and his family. When things didn't work out between him and the mother of his daughter, his ex-wife moved to Denver.

"January of this year, I was sitting back home in Chinle, and I wasn't doing anything," said Nez. "I woke up one day and was just tired of living that same lifestyle for so long."

Nez began searching the Internet for possible options that could help improve his situation. Then he remembered a newspaper he picked up in Phoenix that ran an advertisement for an organization that claimed it would pay for students to receive a GED.

This organization was CollegeAmerica. Nez called CollegeAmerica's offices and found out the school offered a six-week program in Flagstaff for individuals interested in receiving a GED. Last year, CollegeAmerica launched what it calls the Good Neighbor Initiative. The program offers free GED test preparation and even pays for students to take the test.

"I stayed here [Flagstaff] for six weeks. I stayed with family, stayed in hotels, stayed anywhere I could for those six weeks," Nez said. "Then when I was ready, I took the test and I passed."

Currently enrolled at Coconino Community College (CCC), the 22-year-old Nez is studying to become an emergency medical technician (EMT). After two semesters of general studies, Nez plans to take the one-semester EMT program in the fall of 2013.

"I want to eventually become a paramedic, but you have to be an EMT for a full year on the job before you can take the paramedic course," added Nez.

Nez's mother is a registered nurse (RN) in Chinle, which is how he originally became interested in the medical field. Nez and his ex-wife share custody of their 7-year-old daughter.

"My mom and my daughter are my inspiration," said Nez. "Whenever I feel overwhelmed I just think of them and why I need to keep doing this."

Nez said his goal as an EMT is to work on the reservation. Because of how rural the area is, wait times for an ambulance can be an hour or more. He said he picked CCC because it is one of the best teaching schools in the state based on recent statistics. He currently lives in student housing.

Nez thanked CollegeAmerica and all the staff members that work there for helping him succeed and be able to pursue his dream. He thanked his mom and his daughter for pushing him to achieve more with his life and for being that inspiration he needs.

"CollegeAmerica really helped me and they're still paying for the programs, and paying to get to the programs. I went to Prescott, they go as far as Page and Payson, they pretty much go all over, and of course here in Flag," Nez said. "I encourage other Native Americans to set your goals and figure out how you can accomplish them. Find that inspiration that you need and take advantage of it."

More information about CollegeAmerica is available at (800) 622-2894 or at www.collegeamerica.edu.