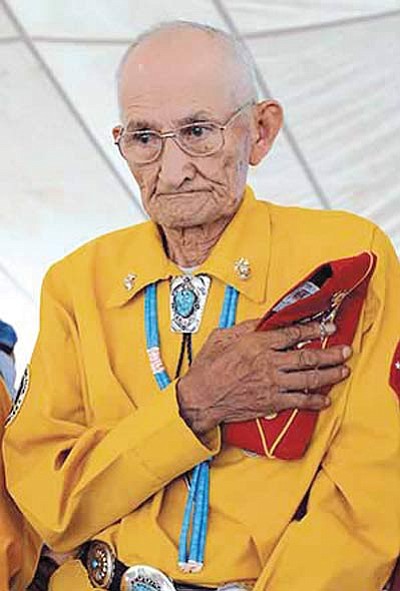 As a tribute to Code Talker Smith's service, President Shelly ordered the Navajo Nation Flag to be flown at half-staff from Oct. 31 through sundown Nov. 4.

"This news has saddened me. Our Navajo Code Talkers have been real life heroes to generations of Navajo people. They have brought pride to our Navajo people in so many ways. The Nation's prayers and thoughts are with the family at this time as they mourn the passing of a great family man who served his country and protected his people," Shelly said.

Smith was born on June 15, 1922 in Mariano Lake, NM. He attended school at Crownpoint, Fort Wingate and eventually earned his diesel mechanic credentials in Chicago, Ill.

Smith enlisted with the U.S. Marines in 1943 and was trained as a Navajo Code Talker. He achieved the rank of Corporal while serving in World War II in the Pacific Theater. He fought in battles at Siapan, Tinian and Ryukyu Islands and served in places such as Okinawa, Hawaii and Japan.

He served as a Code Talker with his brother Albert Smith.

After serving his country, he began work at Fort Wingate Army Depot as a destroyer of old ammunition. He then began work as a mechanic at Fort Wingate Trading Post, working for Paul Merrill. His career eventually led him to Fort Defiance where he was a shop foreman. He eventually finished his career in Shiprock working for the Navajo Engineering Construction Authority as a heavy equipment mechanic.

"Code Talker Smith led an honorable life. He served his country, then provided for his family," President Shelly said.