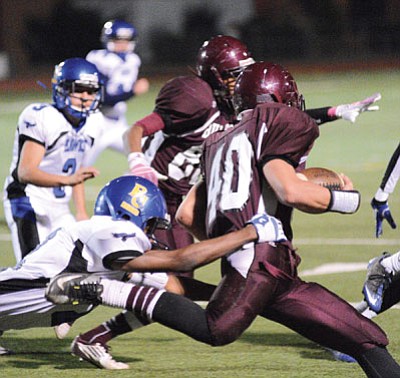 WINSLOW, Ariz. - The former 3A North Region teams in the new Arizona Division IV playoff bracket all lost in the opening round of playoff action. The Winslow Bulldogs and Monument Valley Mustangs both lost at home to lower seeded teams while the undefeated Seton Catholic Sentinels crushed the Chinle Wildcats at Chandler.

The Winslow Bulldogs ended their season with a 28-7 loss to the Buckeye Hawks in the first round of the Arizona State Division IV playoffs at Winslow Nov. 2. The Bulldogs ended the year with a 6-5 record. Buckeye, with an 8-3 record for the season, advances to play second seeded Show Low with an 8-3 record for the season. Show Low will bring a 10-1 record to Saturday's game at Apollo High School after besting Fountain Hills 42-25 in their first round game.

The Buckeye Hawks came from behind 7-0 after the first quarter. At the half the score was 7-7 before Buckeye pulled away from the Bulldogs in the second half. The Buckeye defense was superb and held Winslow to just 42 yards rushing and 84 yards passing with a pair of interceptions. The first half was very close but Buckeye's effective running attack in the second half made the difference.

The Bulldogs got an early break and scored a defensive touchdown with 9:35 left in the first quarter when Akkeem Foster intercepted a Buckeye pass and returned it 37 yards for the score. Lukas Jordan converted the point after for a 7-0 Winslow lead.

On their next possession the Bulldogs drove deep into Buckeye territory before Jordan missed a 37-yard field goal attempt. Winslow led 7-0 entering the second quarter of play.

Buckeye drove 80 yards in 11 plays and scored on an eight-yard run by Jabril Taylor with 10:19 left in the half. Omar Bautista booted the conversion to tie the score at 7-7. The rest of the first half was a defensive struggle and the teams went to the locker rooms tied at 7-7.

A pass interception by the Hawks was returned to the Winslow 32-yard line and led to a five-yard scoring run by Taylor and a 14-7 Buckeye lead after Bautista's conversion with 5:51 left in the third quarter.

DeAndre Miller recovered a fumble giving the Hawks the ball at the Winslow 48-yard line. Taylor scored again on a two-yard run. Bautista's conversion gave Buckeye a 21-7 lead with 3:38 left in the period. Buckeye recovered an on-side kick off at the Winslow 41-yard line but the Bulldogs held their ground. The quarter ended with the Hawks up by that 21-7 score.

The Hawks drove 74 yards and Taylor scored on a four-yard run with just 7:51 left in the game. Bautista converted for a commanding 28-7 lead.

The Hawks got close to the Winslow goal twice more in the closing moments but were content to run out the clock on their final possession. Buckeye will meet the Show Low Cougars at Apollo High School in Phoenix. Show Low bested the Fountain Hills Falcons 42-25 at Show Low Oct. 2.

Other first round winners included the top seeded Blue Ridge Yellowjackets, who crushed the Globe Tigers 57-7 at Pinetop to secure a perfect 12-0 record. The Yellowjackets will meet the River Valley Dust Devils, who beat the Monument Valley Mustangs at Kayenta 58-6. Monument Valley ended its season with a 9-2 record. Empire edged Estella Foothills 28-21 at Estrella Foothills and will meet the Snowflake Lobos, who bested the Payson Longhorns 43-8 at Snowflake. Payson finished the season 6-5, while Snowflake advanced with a 9-2 record. These second round games will be played on Saturday at Washington High School.

The Seton Catholic Sentinels crushed the Chinle Wildcats 61-0 at Chandler to advance to the second round with a perfect 11-0 record. Chinle ended its season with a 5-5 record. Seton Catholic will meet the Mingus Marauders, who edged out the Coolidge Bears by a field goal for a 17-14 win at Mingus. That game will be at Apollo High School.