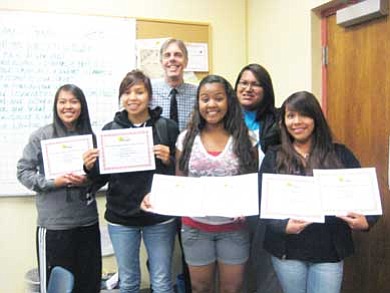 Hopi High was the only Native American high school to win awards and the only high school north of Sedona. Most of the schools winning awards were from the Phoenix and Tucson metropolitan areas.

Stan Bindell, broadcast radio and journalism teacher, said he is thrilled with the awards and proud of all the students.

Bindell said the radio awards were made possible by the partnership between Hopi High, KUYI and the Hopi Foundation so that the Hopi High Teen Show can air every week during the school year.

"I want to thank Superintendent Paul Reynolds, Hopi High Principal Glenn Gilman, the school board and KUYI Station Manager Richard Davis for making this possible. There are many other people at the school and station who help out, so a huge thank you shout out goes out to all of them," he said.

Rucker said winning the award felt good because she didn't expect to win anything.

"It meant that I can accomplish a lot in life," she said. "It motivates me to have my own radio show."

Anthony Antone, a senior, earned two honorable mentions - one for a personality profile on Nicki Minaj and one for a feature story on the National Junior Honor Society.

Antone said he was astonished by the awards.

"It means a lot because I worked so hard and it all paid off," he said. "Radio gives me the ability to be myself and to project myself to others."

Puhuhefvaya, a junior, earned an excellent in the editorial category for her opinion about cultural preservation. She received an honorable mention for her sports story about Hopi beating Tuba City in softball.

Puhuhefvaya said winning two awards was wonderful and made her feel as if she accomplished something big.

"It means I can do anything I want. I just have to set my mind on it," she said. "I'm thinking of going into radio. Radio is interesting and fun. Radio helps me speak well."

Shano Mike, a junior, earned an honorable mention in the news division for a story on domestic violence. She was also surprised that she received a state award.

"It means I can write and give an oral report," she said. "Radio had an impact on my life because I can speak better now."

Dez Kuyvaya, a senior, earned an honorable mention for a commercial about a Leo Kottke concert. She said it was nice to win the award. She said she was proud that she could win an award during her first year in radio.

"Radio helped me to be more outgoing and less shy or nervous when speaking to a hundred people," she said.

Holly Joy Lomatska, who graduated in December, earned an honorable mention for her feature story about Hopi High's coffee house.

Pewewardy, editor of the Bruin Times this past school year, said winning the awards felt great because she felt that her writing classes paid off.

"I feel like a great writer because I have won awards for editorial writing, news writing and feature writing," she said.

Pewewardy said the awards motivate her to do more with journalism because she shouldn't stop doing something she's good at doing.

"Journalism impacted me because I love writing. I wish to continue journalism and make it a career," she said. "My dad was proud because I won two awards instead of just one."

Tewanema, a sophomore, won two honorable mentions. One for sports writing about the first chess tournament held at Hopi High. The second was in the news writing division for her story about the school's tardy policies.