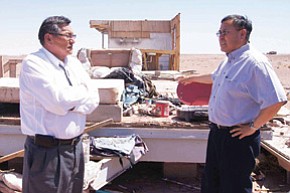 President Shelly (left) consults with Navajo-Hopi Land Commission Director Raymond Maxx about expediting funding for 17 families needing new homes. Behind this is the remainder of a single-wide trailer that was destroyed by a windstorm a few years ago.

President Shelly toured two homes that fell within the former Bennett Freeze area, and area that was place under a Bureau of Indian Affairs executive order stopping development for more than 40 years.

The homes were about a mile north of the Cameron Chapter House.

"We got to get this person a home," President Shelly said as he toured the first home of a resident that wasn't home.

Raymond Maxx, director of the Navajo-Hopi Land Commission, said the man's trailer home was totaled in a windstorm a few years ago. Since then, the man, who wasn't identified, has lived in a minivan next to the remnants of his trailer.

The other home was a dilapidated double-wide trailer home that had two rooms lost to fire but was still inhabited.

Maxx said that money, about $1.2 million from an escrow account, is readily available to help such families and residents to find new housing, but because of bureaucratic protocol, the Navajo Nation hasn't been able to buy homes for the families.

Homes are ready to be purchased, Maxx said.

"We need to do something this week about this. Let's do it," President Shelly said, adding that he is going to meet later last week with members of his cabinet to find a solution to allocate money to the families.

"This is an emergency," Shelly said.

Maxx said his office has identified 17 families living in similar conditions and money is available to help all the families get new housing.

The Bennett Freeze area was inflicted by a policy in 1966 after the Hopi Tribe filed a lawsuit to claim 1.8 million acres of Navajo land. Then BIA Director Robert Bennett issued an order suspending any development on the lands pending the decision of the court.

The freeze remained in effect for more than 40 years until President Barack Obama repealed the order in 2009.