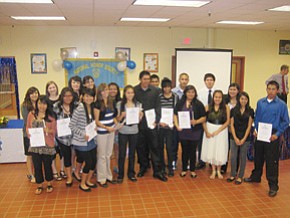 Brandon Barton, another NHS member, led everybody in the NHS pledge. LaVonne Adams is the advisor for NHS.

The events for NHS this year included a food drive for the elderly, painting an H on a hill across from the Hopi Police Department, providing a highway cleanup, holding an Easter Egg hunt for a special education class and NHS members will act as ushers at graduation.

Haskin, a senior, said the NHS induction ceremony was good because everybody in NHS, except for one student, is graduating.

"I was glad to be in NHS because I was able to learn about service," she said. "The highlight was the elderly food drive because we were able to give out more this year."

Haskin said NHS could be improved by having more fundraisers. Her advice to new NHS members is keep grades up and don't get demerits.

Haskin will attend Coconino Community College. She hopes to become a surgeon assistant.