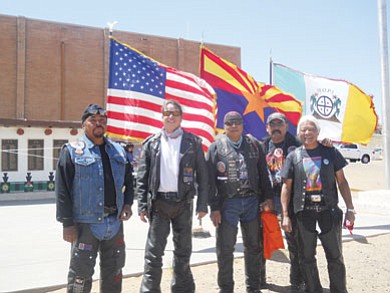 TUBA CITY, Ariz. - It's been 10 years since the first Honor Run and according to Larry Noble, Navajo Hopi Honor Riders (NHHR) Founder, he never thought the Hopi and Navajo motorcycle run would go this far.

"I never thought we would have such success and support for this humble way of trying to honor and remember our military personnel across the Hopi and Navajo reservation areas by riding in a group to honor our people who have served. What started off as just my personal concern and way to remember Lori Ann Piestewa who was one of our Native military who gave her life in service to her country, has become a much more serious, earnest way of trying to remember and give back to our lost military servicemen and women by joining together and being visible in reminding our communities that 'freedom is not free,' it has cost countless lives and we need to remember that, give appreciation for those who died so we can enjoy freedom in our everyday lives. We must bring awareness to that."

This year's Honor Run made 11 full stops to honor those killed in action (KIA's) including 10 from Navajo Nation and one from the Hopi Tribe in the latest war in Iraq. But the NHHR also honors all military personnel who died in service, Native and non-Native, from all prior wars and military action.

"The Iraqi War might be officially over but we still have military personnel out there. I personally have two nephews that are still in Afghanistan. We have many that have come home, but who is there for them to reach out to for support or therapeutic services when they need it?" said Noble. "We have discussed this as the formal NHHR group and recognize that services need to be made available for emotional and spiritual well-being once our military do come home.

"I myself am not a veteran, but I have so many family, relatives and friends who are in the service," he said. "The job is not over for our group, we must recognize these 'warriors' contribution. I really want to thank the original riders who started off in Tuba City 10 years ago. Some of them no longer ride with us, but they started something really positive and good. This is an all volunteer organization, non-partisan, non-political. We ride for those that can't. We all appreciate our freedom."

Noble, who is a full blooded Navajo tribal member from the Edgewater Clan of Steamboat, is joined by his NHHR administrative staff, Larry and Shelly Begay, both of Dilkon community. The Begays' work with Noble to organize, plan, keep up website details, make funeral escort and welcome home escort arrangements and coordinate national riding plans with members of "Carry the Flame" and "Riding to the Wall" non-Native groups.

Larry Begay is from the Salt Clan and his wife Shelly, who serves as the NHHR webmaster and contact point, is from the Bitterwater Clan. They are both full blooded Navajo members.

This year included more Hopi tribal member riders than ever and included one special friend of the Hopi community - TeChan - who is of Japanese descent. TeChan and his wife have lived and worked on the Hopi Reservation in the village of Kykotsmovi for more than 20 years.

On this year's three-day event run, the daily rider total averaged with over 150 riders each day and the final day brought over a 200 rider count along with the police escorts and trailer, car support chase vehicles. But the NHHR membership roster lists over 300 members strong in their membership tally.

Community members, visitors, tourists and students were extremely welcoming to the NHHR riders when they rolled into Native communities this past week. Noon meals, snacks and bottled water were donated by tribal organizations, local trading posts or village stores or Navajo chapters. Most of the actual costs for participating in the NHHR annual run are absorbed by the riders themselves. This includes gas, lodging, evening meals and any other incidentals.

NHHR Founder Noble and Larry and Shelly Begay maintain a Facebook page where community escort plans and requests can be taken as well as contacting them directly for these escort and honoring services for military personnel.