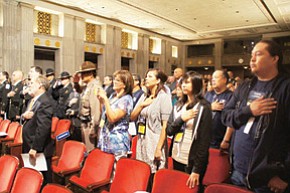 WASHINGTON, D.C. - Navajo Police Sgt. Darrell Curley, who was shot and killed after responding to a domestic dispute between two brothers in Kaibito, Ariz., June 26, 2011, was honored this week at several National Police Week memorial events in Washington, D.C.

Memorial service events included a candle light vigil at the National Law Enforcement Memorial, an honoring ceremony at the Department of the Interior, and the National Peace Day Memorial Service on Capitol Hill where President Obama addressed surviving families and law enforcement officers throughout the country.

"Our country's law enforcement officers use force when they have to. They are well armed and they are well trained. But they never forget that theirs is a mission of peace. Their job is to keep the peace, to allow all of us to enjoy peace in our neighborhoods and for our families. And today, with heavy hearts, we honor those who gave their lives in the service of that mission. Their families are in our thoughts and prayers, as we remember the quiet courage of the men and women we have lost," said President Obama.

Sgt. Curley's name will join the names of seven other Navajo law enforcement officers on the National Law Enforcement Officers Memorial who have been killed in the line of duty since 1979.

Navajo Police Lt. Dempsey Harvey, representing the Chile District, was assigned to assist the family of Sgt. Curley at the memorial events. Lt. Harvey said Sgt. Curley made the ultimate sacrifice in his 26-years with the Navajo Public Safety. "We're here to provide comfort and support to the family," said Lt. Harvey.

Navajo Nation President Ben Shelly addressed the need for increased funding for law enforcement on the Navajo Nation at a recent BIA National budget meeting regarding fiscal 2014 and testified before the House Interior Appropriations Subcommittee regarding the Navajo Nation's fiscal 2013 budget priorities, which included public safety.

May 15 was designated as Peace Officers Memorial Day in 1962 by President John F. Kennedy and the week in which May 15 falls as National Police Week.