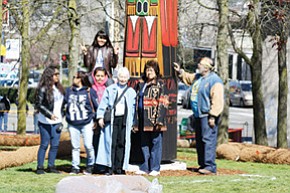 SEATTLE, Wash. - As four Hopi High radio/journalism students descended into Seattle, they didn't know they were in for two surprises at the national Journalism Education Association Conference April 12-15 in the Seattle Convention Center.

One would concern a shocking speech and the other would deal with a couple's overwhelming kindness.

The Hopi High media students all competed in national contests and the Hopi High radio students gave a presentation about their unique radio program: the only live remote Native American teen talk show in the nation.

The Hopi High media students attended a packed two-hour session on bullying, which was an engaging session with students from many schools asking questions.

The other two sessions that the students found most helpful were -

• Nora Guiney's presentation on "Selling Like a Pro," which centered on selling for yearbooks and high school newspapers, but also focused on how to succeed in life.

There were two keynote speakers. Jennifer Sizemore from MSNBC.com led a session about how to use social media for journalism. She gave a unique entertaining PowerPoint presentation.

The other speaker was Dan Savage, author of "It Gets Better: Coming Out, Overcoming Bullying and Creating a Life Worth Living." His speech was against bullying of gays, but he also went into what many described as a rant about the Bible being "wrong about gays." Curse words were also included in his rant. At this point, many advisors and students left.

Several advisors issued complaints on the JEA email list serve. JEA had no idea that Savage's speech was going to be offensive to some.

Many advisors said that while Savage has his First Amendment rights that JEA did not have to give him a platform that was inappropriate for junior high and high school media students.

Janine Shula, a broadcast radio and journalism student, said she liked Savage's speech because bullying is a big issue.

"I learned that bullying can cause serious damage," she said.

Lomayestewa said she liked how Savage spoke his mind.

"I learned that bullying can lead people to harm themselves," she said.

Rucker was in her competition at the time and missed the speech.

Rucker said the conference taught the Hopi High media students to express themselves through their work.

The three Hopi High radio students noted that they were at a disadvantage in the broadcast contests because they have only learned radio and the contests were for television.

"When I walked into my contest, I was scared and nervous," Shula said. "After awhile, I felt better because of the judges and other students telling me what they liked about my public service announcement. I learned what not to do and what to do."

"When I got there, I was the first one there with my video and I was nervous, but when it began it wasn't that bad. Everyone's video was a lot better than mine because they have video broadcast at their school and we don't. But I did okay and I was proud," she said.

Hayah said the competition taught her more about working with video cameras.

Rucker was impressed by Thomas' session on photography.

"He talked about all the things we need to know about photography," she said. "I loved it so much. It really made me set my mind on becoming a photographer. He gave us so many good notes that we can use."

Rucker said Guiney's presentation taught her how to sell.

"The conference inspired me to do more with media like broadcasting," she said.

Shula said she is considering majoring in journalism in college.

Lomayestewa said the conference taught her how to sell herself and take more interesting photos.

Hayah said she wants to do more with media because "it's fun, especially working with computers."

The nice surprise was the kindness of Martha and Lalo Bryce. Martha is the founder and serves on a board for the Seattle-based Red Eagle Soaring Native Youth Theater. Lalo is a Santa Clara Pueblo artist and Vietnam veteran. The couple picked the Hopi contingent up at the airport.

On Saturday, they drove them to several cool Seattle spots.

They hiked down to Puget Sound with almost everybody falling in the mud along the way.

"Their land is beautiful and the stories were awesome. The hike was so much fun and I will never forget all the laughs we had on that hike," Shula said.