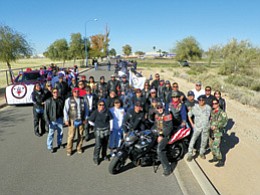 TUBA CITY, Ariz. - As tragic events unfolded on Sept. 11, 2001 when thousands of civilians were killed in the New York financial district by enemy attack and war stepping up with more and more U.S. troops being deployed to Iraq to protect U.S. homeland, thousands of American Indians also joined to help with the fighting, including one Hopi-Hispanic woman from Tuba City, Ariz. - Lori Ann Piestewa.

In March 2003, PFC Specialist Lori Piestewa was listed as missing in action (MIA). After weeks of agonizing waiting, she was eventually listed as killed in action (KIA) after finding that she had died along with four of her fellow troop members, from a serious head wound in a military hospital not far from where her company had been ambushed by Iraqi soldiers.

Since that date, Navajo Hopi Honor Riders (NHHR) Founder Larry Noble, along with Lori's cousin Bobby Martin and Lon and Lori Parker, wanted to initiate a motorcycle run that would honor her memory along with the memory of all lost military personnel and also to express public appreciation for all military servicemen and women in active or retired duty.

This year, 2012, marks the 10th anniversary of the Navajo Hopi Honor Riders organization.

Noble wanted their Native motorcycle group's run to coincide with the nationally recognized Run for the Wall event. He made plans to gather together and ride from their starting point to Tuba City to meet at the home of Terry and Percy Piestewa, parents to PFC Specialist Piestewa.

What started in 2003 with only 15 Native riders has now grown to over 300 riders strong. The riders are both male and female, Native and non-Native, participating in an annual run that covers most of northern Arizona.

This year's run will encompass a huge area of northern Arizona starting with registration and kick off at St. Michael's on May 15, traveling through Ganado to honor KIAs Shondee and Joyce, then to Keams Canyon. Next, the riders will stop at the Hopi Veterans' Memorial Center at 11 a.m., then onto Dilkon for lunch with a moment of silence for Birdsprings KIA Gonzales.

The NHHR will then travel onto Flagstaff by 4 p.m. to the home of Terry and Percy Piestewa to honor Tuba City KIA Piestewa. The NHHR will be met by the national motorcycle group "Carry the Flame." They will return to Cameron for a late supper and overnight stay.

On May 16 at 7 a.m., the NHHR will roll out to Tuba City for a special breakfast to be met by both Hopi and Navajo veterans, Blue and Gold Star families and Hopi and Navajo tribal officials in South Tuba at the Navajo Veterans' Center-Tuba City. Then they will travel onto Page, Shonto and will end at Kayenta for dinner and an overnight stay.

On May 17, they will eat breakfast and then travel to Red Mesa to honor several KIAs - Todacheene, Yazzie, Westbrook, Cambridge and Yazzie. They will have lunch at Beclabito Chapter House and will also honor KIA Tom. They will finalize their afternoon run with travel to Shiprock, Red Valley, Tohatchi, and final stop at Window Rock at the Veterans' Park at approximately 7:30 p.m.

The Navajo Hopi Honor Run non-profit, non-partisan, non-political organization's mission is to "Give support to all military service personnel, past, present and future. We are riding for those that can't. "

The NHHR also hopes to heighten public awareness that "Freedom is not Free." That personal sacrifice is made during wartime and that life sacrifice is something that must be remembered, appreciated and honored by the rest of the country in order to live in a safer world.

NHHR Honor Run Rider Byron Poocha, of Hopi (Deer clan) First Mesa and Pima (Akimel O'otham) Blackwater Community, is a former Marine E-5 Sgt.-Honorable, 1975 to 1979 serving in the 2800 Field, Data Communications Support. He has been riding since 2004. Poocha lives and works in Tuba City, the home of Lori Piestewa and was initially interested in riding because he knew the Piestewas personally. He worked with them both at Tuba City School District for over 25 years.

"When I rode the first time, I was amazed at the public reaction to us. There were people all lined up on the roadsides, waving at us, waving flags and cheering. Even on the remote reservation roads, there would be small clusters of people to greet us," said Poocha. "I think this run, brings a new awareness to our Native community about their relatives and family in the military service. That they become more aware of their sons and daughters leaving for service, not just putting on a uniform, but that they are really putting their lives on the line. This run is a way to honor and remember the daily sacrifice that all our military do for us.

"The weather, of course, is incidental but it does bring the NHHR riders closer together. We have yet to experience earthquake, tornadoes or hurricanes, but we have experienced Rez sandstorms, insect hordes, snow, hail, rain, cold, extreme heat, bike breakdown and just running out of gas. But these are all pretty normal circumstances on a bike ride. I'm lucky, because my wife Eunice (Low Mountain) has been with me on every single run," Poocha said. "We ride whenever we can. She provides me with lots of support to help honor our troops. I've been really honored to be a part of the NHHR history."

Contact numbers for the NHHR Organization, which invites all motor participation including vehicles to follow the motorcycle riders during the annual honor run, can be directed to Shelly Begay at (928) 613-8809.

Information can also be found on their website at shelly@navajohopihonorriders.com or by contacting NHHR Founder Larry Noble at (928) 313-2876.

Community supporters, students and other veterans are encouraged to meet the NHHR riders at each location and to watch for them throughout the Hopi and Navajo reservations' area main roads for their three-day, 10th Annual Celebration Run May 15-17.