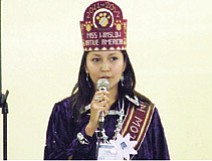 HOLBROOK, Ariz. - The Navajo County Attorney's Victim Services Division recently concluded its third annual Victims' Rights Symposium, on April 27 in Snowflake at the Northland Pioneer College Performing Arts Theater. The symposium is a forum, among other things, where recognition is given to individuals who have distinguished themselves in the last year. The County Attorney's Office also sponsors poster and video contests for local area students in conjunction with the symposium and the winners of these contests were also announced.

A volunteer for the Navajo County Sheriff's Office and County Attorney's Office is recognized for his or her distinguished contributions to the County. This year's Distinguished Volunteer is Dawn Foster. Foster serves as a member of the Victims' Compensation Board and as Treasurer for the Family Advocacy Center.

"Dawn stands out because of the time and energy she brings to her volunteer duties", said Sheriff KC Clark. "She brings a wealth of experience and expertise to our offices, and we could not accomplish what we have been able to in this last year without her contributions. It is a pleasure to recognize her great work."

Another new award bestowed this year is the Varner Law Enforcement Officer of the Year. This award is named in honor of Robert W. Varner, Jr., a Navajo County Deputy who was killed in the line of duty in 1988. This award recognizes a law enforcement officer who goes above and beyond the normal scope of duty to assist crime victims. The first recipient of this award is Det. Nathan Christensen of the Navajo County Sheriff's Office.

"Det. Christensen demonstrates outstanding dedication, patience and perseverance in bringing criminals to justice", said Jaquel Moody, Victims Services Manager. "It is entirely fitting that he be the first recipient of this award. He is a role model for others in the law enforcement community to emulate in investigating crimes. I am particularly proud because of the outstanding contributions he makes to crime victims in bringing their perpetrators to justice."

The poster and video contests are a vehicle for raising awareness of local area students on the rights of crime victims, as well as, rewarding outstanding artistic work of the students. This year's contest was dominated by Holbrook High School students.

"We are careful to ensure the judges do not know from which schools the entries are submitted, but in this year's contest, four of the top six prizes went to Holbrook students," said Brad Carlyon, Navajo County Attorney.

"We are very proud of the participation of all of the students, and gratified that there is so much interest in these contests", said Carlyon. All of the video entries can be seen on YouTube under the tag of '2012 Victims' Rights Symposium Contest.'

Winslow High School student Taylor Cook was invited to the symposium awards luncheon to share her experiences with bullying and to discuss the anti-bullying program she designed and implemented at Winslow High School.

"Her presentation was very moving, and Taylor has had great success in getting buy-in from other students at the high school to sign an anti-bullying pledge", said Carlyon. "Young leaders such as she will solve these types of problems for teenagers in ways that adults cannot."

Two other award recipients recognized that day were former Victims Compensation Board Members whose terms of service had concluded. The two board members were Det. Danny Deets, Navajo County Sheriff's Office, who rotated out after a three-year term and Dr. Bob Wilderman, who served on the board for over 15 years. The Compensation Board meets regularly and decides on victim applications for compensation for expenses such as burial, counseling and medical bills related to the crimes committed against them in Navajo County.

Further information about the awards and the symposium is available from Brad Carlyon at brad.carlyon@navajocountyaz.gov or (928) 524-4026.