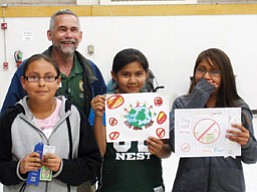 The contest, held in the fall of 2011 in conjunction with the anti-drug campaign Red Ribbon Week, was open to all Coconino County sixth graders. Students from all over the county submitted over 400 posters.

The County Attorney's Office assembled a selection committee, consisting of police officers, scholars and prominent community members. The selection committee had a difficult time narrowing the field, but was eventually able to select the winning posters, as well winners from each school that participated. The winning posters are depicted on a colorful 2012 wall calendar, along with a list of the names of the winners from each participating school. The wall calendar is available free at the County Attorney's Office or can be viewed at www.coconino.az.gov/CountyAttorney.

"This contest is a fun way for kids to integrate the drug free message with creative artwork and promote the drug free lifestyle in our elementary schools. We are thrilled that so many students participated in this year's contest," said Rozema.

The following students were recognized -