Sun powered water pump up and running at Hopi ranches 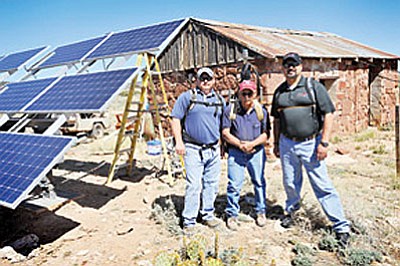 WINSLOW, Ariz. - The Sun Forehead Clan and the Sun Clan might be considered inspiration for the recent installation of solar energy for pumping water out of Clear Creek Canyon. But non-Kachina Duane Coleman, Three Canyon Ranches Manager, obtained grant funding for this and other similar projects coming online in the future. This solar pump was up and running on April 26, at a location called Pump Canyon on Clear Creek Canyon about 15 miles as the crow flies, south of Winslow. Overland, it's a drive south on Highway 87 then east on a dirt road for about 10 miles each leg. You arrive at the canyon's west wall where there are some old buildings and rock structures.

This is the site of the first pumping station on Clear Creek for ranches in this area, being established in 1915. The ranch was owned by the Babbitt family and was named Clear Creek Cattle Company. The original pump was powered by a single cylinder Fairbanks Morse gasoline engine producing 10 horsepower at 350 RPM. The motor and pump were in a specially constructed rock enclosure and attended by a man that lubricated all the components with an oilcan during the time that the gas engine was running. All of the engine's rotating components were exposed, not enclosed, were very large and needed constant attention. The engine driven pump raised water 300 feet up the canyon in a two and a half inch black iron pipe where it was stored in a large rock cistern.

This was the first permanent water hole for the cattle in this area. At this time there were no windmills or pumps, only shallow graded collection ponds for rainwater, which were dry during the summer months. One issue with the original pump was flooding by Clear Creek periodically. Excessive water levels in the canyon were able to flow over the edge of the rock enclosure housing the 1915 system causing costly repairs and "out-of-service" time. This original pump system was used until 1935 when it was replaced by a different pump, powered by an electric motor.

Fred Bixby owned the ranch here at this time in 1935 and he decided to modernize the Pump Canyon establishment. Bixby had a hard rock miner blast out a 35-foot shaft going down next to the creek at the would create a protected pump and motor area, not subject to flooding. The pump installed was powered by and electric motor which in turn was energized by a generator at the canyon top, housed in a red sandstone "generator house." Incidentally, the house still stands, in decent shape today. This pump produced about 5 to 7 gallons per minute, feeding into the cistern. Next up for improvements to Pump Canyon was when the area was the "Tom Chauncey Ranch."

Of course the pump works only in the daylight and stops at night. Batteries would add an unnecessary expense and complication since the new solar pumping system produces about 1,800 to 1,900 gallons of water per day from Clear Creek. The new solar pumping system was installed by Dave Hartman of "Cross U Well Service" of Winslow, Jeff Coleman of Gicon Pumps and David Perez of American West Windmill and Solar Company. Eventually there may be a tour opportunity to visit the solar powered Pump Ranch and see the details first hand.