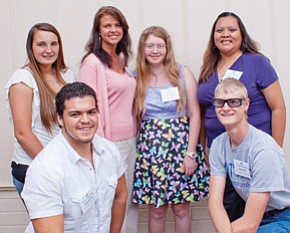 SHOW LOW, Ariz. - Northland Pioneer College (NPC) honored its top six 2012 graduates and their guests at a luncheon April 25 at Licano's Restaurant in Show Low. The college hosts the annual event to honor those students with the highest grade point averages in the areas in which the college offers an associate degree..

Generally, there are five students named as the college's outstanding graduates. This year, however, noted luncheon host Mark Vest, NPC Vice President of Learning and Student Services, there were six designees.

"For the first time ever, we had a tie. Even our tie-breaker system didn't work since both students had the same GPAs and the same number of credits," said Vest.

The two students who tied for outstanding graduate honors were Cody Elliott of Eagar and Eduardo Diaz, St. Johns. Both are Northern Arizona Vocational Institute of Technology (NAVIT) students who also earned Associate of Applied Science (AAS) degrees in welding at the NPC/NAVIT facility in St. Johns. While the applied science degree emphasizes hands-on training, AAS students also are required to complete general education courses in mathematics, English and the physical or social sciences.

Cassandra Nahsonhoya, of Winslow, the 2012 Outstanding Associate of General Studies (AGS) degree recipient, will not only earn her associate degree this spring, but by year's end, also will have earned her bachelor's degree in criminal behavior from Western International University. She is already interviewing with national agencies to launch a career goal of working with troubled youth.

Associate of Arts (AA) outstanding graduate Barbara Akins, Eagar earned another honor while attending NPC - being named to the prestigious All-Arizona/All-USA Academic Team. The major benefit of that achievement is a full-tuition waiver to the Arizona state university of her choice. Akins plans to attend Northern Arizona University for a degree in business administration, although she is also considering taking some law studies as well.

Another Eagar resident, Carrie Faulkner, will leave NPC as its top Associate of Business (AB) graduate at the commencement ceremony on May 19. One week later, she will take part in another ceremony - her wedding. Since she and her husband plan to continue living in the area, she is considering enrolling for online courses in accounting from NAU.

Homeschooled until she enrolled at NPC in Spring of 2009, outstanding Associate of Science (AS) graduate Tanya Puckett plans to take advanced computer classes at NPC while she decides on her next educational or career move. A writer who uses her science background to make her stories more realistic, Puckett says she will devote her energies this summer to publishing a novel she has written.

These six outstanding graduates are among the more than 400 students who will have earned either an associate's degree or program certificate from NPC during the 2011-2012 school year. They will take part in the 38th annual NPC commencement ceremonies on May 19, at the Show Low School District Auditorium. Admission is granted to reserved seat ticket holders only.