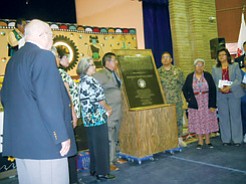 Families of the Hopi Code Talkers were present to witness the formal unveiling of a specially commissioned bronze plaque that bears both the English and traditional Hopi names of each Hopi Code Talker. Smaller versions of the formal plaque with metal etched photo plates were also given to each surviving family by the Hopi Veterans' Administration Director Eugene Talas.

KYKOTSMOVI, Ariz. - In many ways, Hopi tradition does not embrace war, personal pride or overt public recognition. However, April 23 has been formally set aside by the Hopi Tribe to annually recognize the major combat contributions of 10 of their tribal members to be remembered for their heroic service. Because of their attention to detail in how well they spoke their own tribal language, the veterans demonstrated military dedication to help create an "unbreakable secret code" that helped contribute to a successful U.S. war victory in World War II.

Beck, whose own military background includes a Masters of Strategic Studies from the U.S. Army War College and an LLM in Military from the Judge Advocate General's School, is a graduate of Appalachian State University and also has a degree from Duke University of Law.

"The Hopi Code Talker story is a great one. It's one of historic significance," said Beck. "From the 1st Marine Division, some of the most decisive battling took place and these Hopi men were in the midst of some of the most horrible fighting. But these Hopis drew from their Hopi culture, their Hopi heritage, their Hopi spiritual strength and with bravery and humility, they were able to break the enemy code, and able to communicate among their fighting units with secrecy. Literally thousands more could have been killed if not for their precise Hopi language skills in decoding. They did their part. This was in September of 1944 and they were doing something extremely significant for the future of our nation. The United States would not have been successful without these brave men."

At least eight of the original Hopi Code Talkers had boarded ships and were reunited with their units, the U.S. Army 223rd Infantry Regiment, 81st Infantry Division off the shores of Angaur Island, Palau.

Their assigned mission was to take over the island and formalize a central location in the Pacific Ocean, according to military documents. With the Japanese intelligence so highly advanced in breaking most military codes, the Hopi Code Talkers were able to use their own tribal language to create an "unbreakable code" in their winning military strategy.

Maj. Gen. Paul Mulle was in charge of the mission in 1944. His formal journal lists the fighting as lasting three brutal days and having one of the highest number of casualties during WWII, circled the island gaining control over Japanese forces. This single island takeover resulted in the final overall victory in the Pacific with a final win for the United States in the war.

"These heroic Hopi men, who did not seek special recognition, but are justified in having a special day set aside for them by their own tribal community. I truly appreciate what they have done, what they each contributed to help save countless American lives should not be forgotten," said Beck.

It has been five, long years to get the formal tribal, state and national recognition for the Hopi Code Talkers.

In May 2011, Arizona Secretary of State Ken Bennett formally signed SCR-1009 during a special ceremony at the Hopi Veteran's Memorial Center.

The Hopi Code Talkers, who served in the U.S. Army and the 380th Bombardment Group, were also known as the "Wildcat" Division during World War II. They were selected to develop this special secret code by virtue of their skills in their own tribal Hopi language. By speaking and utilizing their Hopi tongue, they confused the Japanese enemy and contributed to the liberation of the South Pacific Islands.