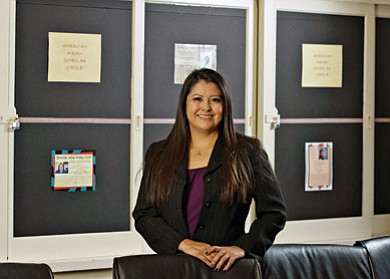 TEMPE, Ariz. - Fonda Walters' higher education journey started when she was just 5, a Navajo girl growing up in Tuba City, whose father frequently asked her at dinner, "Where are you going to college? And, what are you going to study?"

Answers to the questions he posed changed through the years, but Walters always knew college was possible and probable because her parents never doubted her potential. Now, she is a proud member of a family of six siblings, all of whom are first-generation college-degree earners, including a brother who has earned his doctorate.

Walters has reached the pinnacle of educational attainment at Arizona State University (ASU) by earning her doctoral degree in education through the Leadership for Changing Times accelerated program for working professionals. Besides her hard work, she credits her family's support and that of the Navajo community who gave her strength through prayer ceremonies to excel in her studies.

"I went to my family for guidance and help. We held traditional ceremonies to get me through while we were doing this," she said. "This is my family's degree, and those who came to my ceremonies who I didn't know well. They stayed up all night for me."

Walters had been thinking about earning her doctoral degree for years before she found the program at ASU that was just starting for working professionals. Accepted in June before the start of her August 2009 semester, she was one of the first to be accepted.

"I thought, either I go out and do it, or I stop talking about it," she said. "However, I didn't have money for school or a job in the Valley at the time."

After landing an ASU job in downtown Phoenix, Walters searched for funds to finance her doctorate and ended up securing the support she needed at the last minute.

"It was an extremely accelerated program with a very supportive environment and an excellent structure," she said. "I was up for it. I had to take that leap of faith."

That's not to say working on her doctorate didn't require sacrifice, especially when it came to spending less time with her children who ranged in age from 8 to 17 when she started her degree. Eventually, Walters landed a job at ASU as senior research analyst for the American Indian Policy Institute.

"That was a Godsend. The American Indian Policy Institute has been extremely supportive of me," she said.

"First Innovations students work with real people and real organizations," she said. "The concept of social entrepreneurship resonates with a lot of students when you talk about language preservation and other drivers that sustain who we are as a people. This is especially important among tribes that can take lessons learned through the First Innovations practicum and apply entrepreneurial thinking and practices to the next level beyond gaming," Walters said.

"I look at this as just the beginning. I think we need to model big thinking with high impact. I would love to put this curriculum into tribal colleges across the country," she said.

Walters also hopes that other Native American students will realize that they can complete college, despite challenges experienced along the way.

"It can be done, one class at a time. It comes with sacrifice and you may not have money. You have to be prepared to accept the long, rough, and sometimes smooth road. You have to set your goal and go," she said.