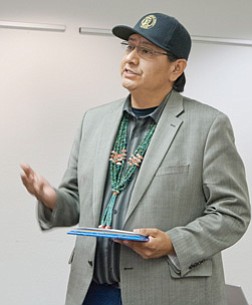 HOLBROOK, Ariz. - A well-known county figure attended the NPC District Governing Board April 17 meeting - Navajo County District One Supervisor Jonathan Nez. The occasion of the supervisor's appearance was his nomination as the Northland Pioneer College Outstanding Alumnus for Fall 2011.

Myrtle Dayzie-Grey, NPC Kayenta Center adviser, nominated Nez for the honor, citing his leadership for his people in both Navajo County and the Navajo Nation.

Nez is Navajo. He is of the 'Ashííhí (Salt) Clan, born for the Ta'neeszahnii (Tangle/Badlands) Clan. His maternal grandfather's clan is the Tódíchii'nii (Bitter Water). Táchii'nii (Red Running into the Water) is the clan of his paternal grandfather. Nez was born in Tuba City and raised in Shonto and Kayenta. He was a 1993 graduate of Monument Valley High School and now lives in Shonto in northwestern Navajo County.

Education figures prominently in the Nez family. He met his wife Phefelia Herbert at Northern Arizona University (NAU) where she was earning a Bachelor of Science degree; she is now pursuing her master's degree in public administration. They are the parents of a new learner, a 3-year-old son, as well as two teens, a 17-year-old daughter and a 14-year-old son. Both are students at Monument Valley High School.

In addition to his current position as a Navajo County supervisor, Nez is a delegate to the Navajo Nation Council, the governing body of the vast Navajo Nation. He represents an area encompassing the Shonto, Inscription House, Navajo Mountain and Oljato chapters (two in Arizona and two in Utah). He also manages to find time to sit on a number of boards and commissions. In the words of his nominator, "Nez is a true civil servant for his people and members of Navajo County outside the Navajo Nation."

Dayzie-Grey recalls him coming to her office in the fall of 2001 seeking to complete an Associate of Arts degree in political science. He had taken classes from NPC in 1993-1994 and 1996, as well as earning credits from Diné College, NAU and Pima Community College, so he only needed five more courses to fulfill his degree requirements. He completed those in just one semester, even earning membership in the international two-year college honorary society, Phi Theta Kappa (PTK). He graduated from NPC with "High Distinction" in 2001 and immediately went on to earn his Bachelor of Arts (BA) degree in political science at NAU in 2002.

Shortly thereafter, Nez began his political career by first being active in local tribal government. He says he was inspired to his calling by the stories he heard as a child about his grandfather, H.T. Donald, who was a Navajo Nation Council delegate from Shonto. "My grandfather was known for his generosity and compassion ... I grew up with stories and people sharing with me how he helped the people. I felt I wanted to help out my community and, with guidance from my grandma, started from the bottom."

Nez often mentions in his speeches that he is a graduate of Northland Pioneer College saying, "If I can do it, anyone can do it." But it is more than that; Nez is a man motivated by a desire to finish what he starts and that has included getting an education and now means devoting himself to the service to the Navajo people.

Upon receiving his award, Nez commended the dedication of NPC's Kayenta Center employees Lorraine Benally, center manager, and adviser Dayzie-Grey. "Their efforts on behalf of Navajo students are making a difference. NPC is an important part of the Navajo Nation. I appreciate your efforts in serving the residents of Kayenta," he said.

To note his being honored as an Outstanding NPC Alumnus, Nez received a commemorative plaque, tuition gift certificate and small gifts from the college.