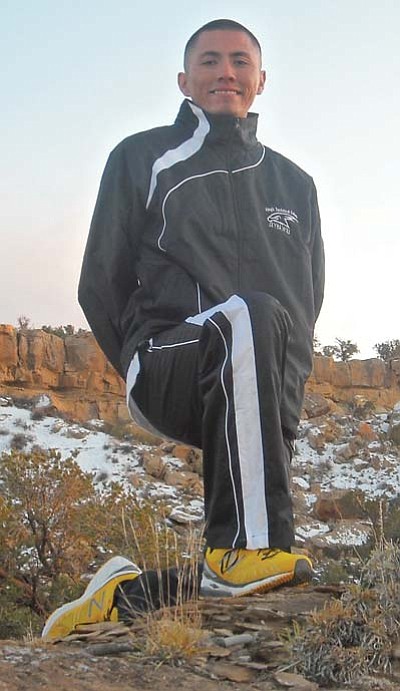 Submitted Photo<br> Environmental Science and Natural Resources major Dwight Carlston has been named Navajo Technical College’s Student of the Year. In addition to excelling in the classroom with a 3.88 GPA, Carlston also excelled in cross-country, placing 51st at the USCAA Cross Country Nationals in Lake Placid, N.Y. last fall.

Carlston excelled both in and out of the classroom this year, carrying a 3.88 cumulative GPA while also participating in National Technical Honor Society (NTHS) and the student organization, Hózhó for Students. In addition to his success in academics, Carlston also placed 51st at the USCAA Cross Country Nationals in Lake Placid, N.Y. last fall.

"In order to do cross country and school, you become a student athlete, where the student always comes before the athlete," said Carlston, who will be graduating with an Environmental Science and Natural Resources associate's degree in May. "It also takes a lot of self-discipline in taking time out from hanging with your friends. You just have to balance out the two."

Although Carlston will be graduating with his Associate's of Applied Science degree this spring, he plans on continuing his education with NTC as the school attempts to obtain a four-year bachelor's degree in Environmental Science and Natural Resources through the North Central Association (NCA) accrediting board later this spring.

"I'm excited to start a bachelor's program, especially here at NTC," said Carlston, who also obtained a certificate in NTC's carpentry program in 2008. "It's very close to home, and it's going to be affordable rather than getting a four-year degree from some other university."

The American Indian College Fund and the Castle Rock Foundation sponsor the Student of the Year program, and they empower each eligible tribal college participating in the American Indian Higher Education Consortium (AIHEC) to select their own student. In being named Student of the Year, Carlston will be awarded a $1,000 check that may be used to pay tuition, fees, room and board, books or any other educational need.

Carlston was recognized by the American Indian College Fund at a reception held in Rapid City, S.D. on March 24 during AIHEC's annual student conference.

"I'd just like to thank my parents, all of my coaches from the past until now, and my Environmental Science instructor, Mr. Steven Chischilly for getting me the opportunity to excel here at NTC," said Carlston. "I'm very happy I'm being recognized."