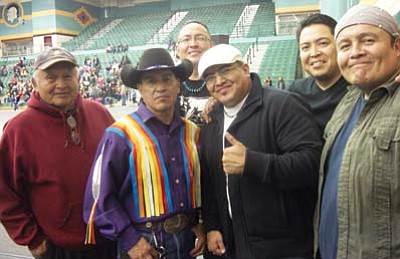 TUBA CITY, Ariz. - On March 2 the Project Peace Train made a stop in Tuba City to bring laughs and happiness to the Tuba City community. The event was held at Greyhills, as part of their Meth Prevention Conference and the Tuba City High School as well during the day with a performance for the public in the evening at the Warrior Pavilion.

For the evening performance the stands were filled to hear the comedic stylings of Ernest David Tsosie III, James Junes, Pax Harvey, Tatanka Means and Adrianne Chalepah as well as other performers. The Peace Train Project was the idea of John L Tsosie and Ernest Tsosie Jr. the brother and father of renowned Navajo comedian Ernie, from the James and Ernie duo.

"The project was put together to bring comedy and healing to communities with domestic violence, substance abuse, bullying, suicide and other problems being faced in communities on the reservation," said John Tsosie.

The idea came up to bring the perfumers of the 49 Laughs Comedy show to different schools on the reservation.

"Teachers at some of the schools were surprised to see students paying attention to the performers who had difficulty paying attention in school," said John Tsosie. "So it makes an impression on students."

This event was sponsored by the Tuba City Regional health Care Corporation, and John Tsosie hopes to continue to bring healing in the form of laughter to the community by holding more events such as these. "There are many challenges facing young people in the community and this is one way to show them they count" says JohnTsosie. For more information check www.facebook.com/projectpeacetrain.