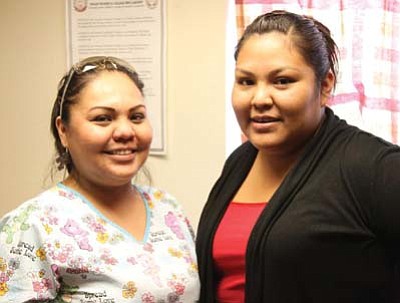 CROWNPOINT, NM.-Navajo Technical College nursing instructor Shawnadine Becenti was named Faculty Member of the Year in a recent voting by students for the 2011 - 2012 school year.

NTC Student Senate conducting the voting, which took place over the course of two days where students could nominate and vote for a faculty member at lunch or over NTC's Facebook page.  According to Student Senate president, Sharon Cooley, Becenti received the most votes by a large margin, besting out three other instructors who tied for second.

Becenti started working with NTC as an adjunct instructor in 2008, but wasn't hired on full-time until last fall when NTC's nursing director was hospitalized due to illness. With another instructor already out due to health issues, Becenti found herself not only instructing class but serving as the nursing program's main facilitator.

As the nursing program facilitator, Becenti had to manage the operations of NTC's pre-professional and registered nursing programs, as well as recruit a new nursing instructor and head the selection committee for NTC's second cohort of RN students.

"I had to learn a lot of what I was doing fast in order to hold the programs together," reminisced Becenti, who commutes to work from Gallup, NM everyday. "I didn't think it was fair for the students that their instructor got sick so I told them that, if possible, I was going to get them through their courses."

To fulfill her promise, Becenti ended up instructing ten nursing classes so students wouldn't be left with an incomplete grade.

"It was tough because all the instructors have their own curriculum and delivery methods of lecture, which the students were used to," said Becenti. "What I tried to do was build the program in a way that would put out good nurses who'd I'd want to work with."

While Becenti was recognized by several students for willingly filling in as their instructor, she was also recognized for saving NTC's two nursing programs.

"If it wasn't for her we wouldn't have any nursing programs for the students here at NTC," said first year RN student Dellyn Wilson of Kayenta, Ariz. "She worked day in and day out to make it possible, and I have learned so much from her and continue to do so."