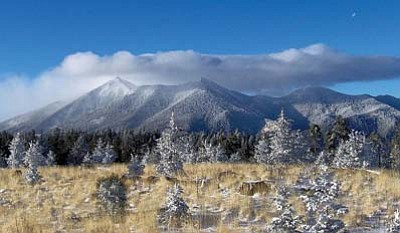 FLAGSTAFF, Ariz. - Last week the city of Flagstaff renewed their contract with the Arizona Snowbowl for the use of reclaimed water usage. This is a troublesome development for both the Navajo and Hopi tribes who have been fighting for years to protect the San Francisco Peaks.

In a telephone call to Hopi Vice Chairman Herman G. Honanie from Kristin Bail, Deputy Forest Supervisor (Flagstaff Region), the Hopi Tribe was informed that plans for artificial snowmaking on the Arizona Snowbowl will begin Friday. According to Bail, in an effort to lure skiers to the Snowbowl during spring break, potable water will be trucked in beginning Friday to the Hart Prairie area, due to low snow levels. No mention was made of how long it will take.

"I am very disheartened by this news" said Vice Chairman Honanie. "The Hopi Tribe strongly disagrees and opposes this. By resolution, the Hopi Tribal Council officially stated their opposition to the use of any water for artificial snowmaking."

The Hopi Tribe, along with several other tribes, have long fought this in court. On Aug. 19, the Hopi Tribe filed a lawsuit against the city of Flagstaff in the Arizona Superior Court in Coconino County, challenging the city's decision of September 2010 not to amend or cancel the contract for the sale of reclaimed wastewater to the Arizona Snowbowl ski resort for snowmaking.

The same news was also met with grave concerns by Navajo human rights officials and the Navajo Nation Human Rights Commission (NNHRC) in terms of improving race relations with the communities surrounding the Navajo Nation.

On March 5, NNHRC learned the contract might be up for renewal on March 12, and attempted to verify the information with city officials to no avail. The following day, a city official explained that the renewal was tentatively scheduled for review and discussion for the March 20 Flagstaff City Council meeting.

"Information exchange is a barrier between the city and the Navajo Nation, one we both must overcome," said NNHRC Executive Director Leonard Gorman.

Only five towns including Grants, N.M.; Gallup, N.M.; Farmington, N.M.; Cortez, Colo.; and Bloomfield, N.M. have signed onto improving race relations. The city of Flagstaff is next.

Typically, once a city is engaged to initiate the MOU process, the process entails negotiations between the NNHRC and the city staff members who seek their counsel's expert opinion to determine the language unique to the particular city. The language is then considered by the city's legislative council and if approved the MOU is returned to NNHRC for its Commissioners to approve. The MOU then is directed to NNHRCs governing body, the Naab'ik'iyati' Committee of the 22nd Navajo Nation Council to approve. A signing ceremony finally takes place at a press conference with the intent to openly address race relations, improving race relations within the city government for its citizens.

For citizens of Flagstaff, the Flagstaff City Council approved the MOU, 6-0, in favor, on Feb. 2 to improve race relations between Navajos and non-Navajos in the city of Flagstaff.

On March 2, NNHRC Commissioners approved the MOU, 2-0, in favor. Next, the MOU will be considered by the NNHRC oversight committee, the Naab'ik'iyati' Committee of the 22nd Navajo Nation Council, at a date to be determined. At that time, if the Navajo Nation committee favors the MOU, it will be fully executed.

Though, on Feb. 28, a city official had begun to act in the spirit of the MOU and stated so about an unrelated matter pertaining to the death of a Navajo citizen in Flagstaff, Ariz.

As for the MOU, Gorman said, "The MOU negotiated with the city of Flagstaff provides for," and he referenced the MOU specifically, "Together the commission and the city intend to move forward acknowledging and respecting our mutual histories, and in order to build upon the past and improve the future; this understanding is entered into with a spirit of Hózhóogo."

Gorman further stated, "The contract was renewed without the benefit of input from NNHRC and is certainly contrary to what the MOU states, Hózhóogo."

"Navajo Elders teach that manmade snow is a manipulation of nature, which should not be mimicked by man. The deities control the nature cycle of the weather and seasons, and should not be mocked. Navajos and non-Navajos share a responsibility to care for these sacred places. Even if governments do not demonstrate responsibility towards the Peaks, the Navajo government and people and others will continue to honor this scared place to preserve the Navajo Life Way.

"The sacred mountains serve as the foundation of the Navajo Life Way. Among the six mountains, the Peaks to the West, Mount Hesperus to the North, Mount Taylor to the South and Mount Blanca to the East represent the sacred elements of earth, fire, water and air. Also, each element symbolizes freedom, cultural integrity and dignity, language, and spirituality and ceremony. Moreover, the mountains serve as the original lands of the Navajo when first man and first woman emerged into this world. Each element of the mountains is inextricably linked to a person's mental, physical, and spiritual health. When one of these elements is harmed it throws the Navajo Life Way out of balance."

Hopi Chairman LeRoy Shingoitewa said, "Nuvatukya'ovi, the San Francisco Peaks, are a sacred and special place to many Native Americans and we are obligated to protect this area. Reclaimed water is an unsafe byproduct of the city's wastewater system."

"This last decision to haul potable water was without notice or consultation and the lack of formal consultation violates the National Historic Preservation Act" said Leigh Kuwanwisiwma, Director of the Hopi Tribe's Cultural Preservation Office. "In 1998, the Hopi Tribe entered into a memorandum of agreement with Coconino National Forest. This MOU clearly calls for formal consultation on all federal undertakings. Ms Bail, Deputy Forest Supervisor chose to ignore it. This behavior by the United States Forest Service/Coconino National Forest is another example of disrespect shown to the Hopi people."

United Nations Special Rapporteur on the Rights of Indigenous Peoples S. James Anaya had reported to the U.N. Human Rights Council on September 21, 2011 about the "United States of America: Situation of the Native Americans in relation to artificial snowmaking from recycled wastewater in the San Francisco Peaks," as a violation on Navajo human rights.

Gorman said, "This act clarifies the need to be part of these discussions and we cannot hope that city officials will hear the cries of our people, instead we need to be at the table and open the discussion."

It has been said that the reason Flagstaff has agreed to allow the use of reclaimed water on the peaks is because it could possibly benefit the local economy. A recent study by the Hopi Tribe shows otherwise.

An economic analysis released by the Hopi Tribe and prepared by Bioeconomics, Inc. determined that the Arizona Snowbowl expansion and the availability of reclaimed wastewater for snowmaking will not provide a measureable or significant economic impact to the Flagstaff region's economy. Despite contrary reports, impacts to the region's economy based on the Snowbowl expansion are too trivial to have a statistically significant impact. The conclusions drawn in other reports are based on fallacious analyses of data that overstate the benefit to the region's economy by at least 130%.

According to Bioeconomics, the analysis in reports that Arizona Snowbowl has relied on to garner support for its expansion incorrectly considered factors, such as expenditure impacts from local residents, which are not applicable to a regional economic analysis.

"It is fundamental in these types of analyses not to include local residents' expenditures because it does not represent an injection of new money into the region," said PhD economist Dr. John Duffield of Bioeconomics. An article in the Journal of Travel Research concludes that the most frequent "mischievous error" in computing impacts to regional economics is to include impacts from local residents. his "mischievous error" is often made to inflate the results as the true impact of an enterprise on a region's economy is too small to detect.

Bioeconomics estimate that this error inflates Snowbowl's impact to the regional economics by at least 130 percent. For these same reasons, the Snowbowl expansion will also not provide a significant number of new jobs for the area's economy. Arizona Snowbowl is simply too small of an enterprise to have any meaningful impact and it is statistically incorrect to claim that the Arizona Snowbowl provides a measureable benefit to the Flagstaff area's economy.

Bioeconomics' economic analysis demonstrates that even without the proposed expansion, based on the actual net income reported for Arizona Snowbowl in the EIS for years 1993-2003, which averaged $242,000 per year, Arizona Snowbowl is a stable enterprise with a present value of approximately $4 to $5 million. Arizona Snowbowl has received the value of its investment. It has existed as a ski area with variable annual returns but a net income stream since at least 1992 sufficient to support valuation of around $4 million - the price it paid. Arizona Snowbowl is currently a viable business operation and has survived in its current condition for twenty years. Bioeconomics' analysis shows it is not true that Arizona Snowbowl is a failing business that needs to be rescued by the infusion of valuable public in support of such an ill-advised project.

The Bioeconomics' report confirms what the tribe has repeatedly asserted, the proposed expansion and use of reclaimed wastewater on a sacred place, the San Francisco Peaks, is not in the public's best interest, particularly because the ski area is bounded by a designated wilderness area, the Kachina Peaks Wilderness. The proposed expansion will only provide small additional economic benefits to Snowbowl's owners and to a small population consisting of the Snowbowl skier demographic that may want an extended ski season. The Flagstaff region will not realize any appreciable economic benefits and all of the costs will be borne by endangered species, threatened habitats, Indian Tribes, and the general public who value the purpose and uses for which the Kachina Peaks Wilderness Area was originally designated by the U.S. Congress.

Go to www.hopi-nsn.gov/news for full report.