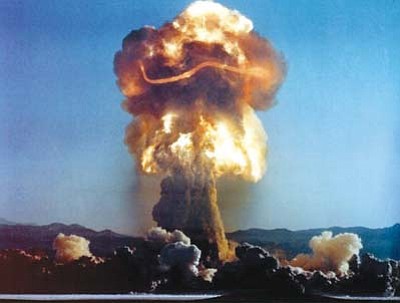 Submitted Photo<br> Shown is one of the nuclear tests that exposed people from three states to radiation.

FLAGSTAFF, Ariz-During the Cold War the United States operated a nuclear weapons testing program in Nevada. While the program might have been run with good intentions, the testing resulted in unfortunate consequences as people across three states were unknowingly exposed to radiation.

Due to this exposure many people across Nevada, Arizona, and Colorado acquired serious health problems, some resulting in death. Many people have heard the word downwinder, which refers to the people who got sick that were down wind of the nuclear testing site.

Because of their location many of the downwinders are members of the Navajo and Hopi tribes. In 1990 congress passed the Radiation Exposer Compensation Act (RECA) as an apology to those that were affected by the nuclear testing, as well as those who worked with uranium. The act provides compensation to individuals that developed certain diseases as a result of the exposure to radiation.

Since 2007 North Country HealthCare has been offering their services under the RECA act to those affected by the radiation. They offer the Radiation Exposer Screening and Education Program (RESEP).

"The program provides a no cost medical screening," said Shannon Williams coordinator for the program. "We still take the patients insurance and bill the insurance company, and if there is any remaining balance or the insurance won't cover it, or even if they don't have insurance our program will pay for their exam."

The screening is meant to determine, whether or not the person is ill, what illness they have, and if they are eligible to file a claim.

"We offer an intense physical with lab work, blood withdrawal, urinalysis, chest x-ray etc. We can provide this yearly to the downwinders," said Williams.

North Country Health care if the only buisiness that offers the program in the immediate area.

We're grant funded so north country has had this grant since 2007," said Williams. "North Country was a site for the medical screening, and then once the group who had written the grant realized that North Country was the only one involved they pretty much handed the grant over to us."

The main program office is in Flagstaff but other satellite facilities alos offer the no cost screening, as long as they are in eligible areas. The areas counties for Arizona include Gila, Apache, Coconino, Navajo, and Mohave. The person must have lived in one of those counties for two or more years between Jan. 21 1951- Oct. 31 1958. or the entire period for June 30 1962 until July 1962.

Not only does the RESEP program offer the no cost screenings but they help interested people to file their claims and receive compensation.

We can assist clients through the whole process until they mail their claim to the department of justice," said Williams. "Because it it a pretty lengthy process once the client has gathered all their documents they need to show proof of their cancer and proof of their presence in there area, children can also file on behalf of their parent if their parents are deceased and then grandchildren can file for their grandparents."

"We can also help with the RECA claims," said Williams. "A person can do it on their own, or they can hire an attorney but and attorney can take up to 10 percent of their compensation and we are a free service."

Although there are many categories for those who can apply for compensation North Country mostly sees downwinders.

"We predominantly see downwinders," said Williams. "We really don't see that many uranium miners and we usually refer them to the Tuba City Navajo nation uranium workers office, because they are more familiar with those cases.

Because the area that program covers is so large, they do travel around quite a bit.

"Our service area is the six counties," said Williams. "So we do travel quite often and we do require the person to call and schedule an appointment for that reason. We will be in Williams on march 27 for free screening all day."

Fro many people the thought of having to file all the paper work and go in for screening can be somewhat daunting. But this is something that is owed to them.