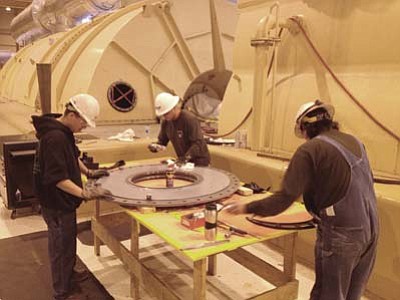 Photo/George Hardeen<br> From left to right, Mitchell Emerson, Myron Whitehorse and Durral Whitehorse clean a section of the “T-8” bearing oil deflector by hand. This is a critical part of the Navajo Generating Station Unit 3 turbine behind them. They are among some 800 skilled workers involved in this year’s four-week-long, $16 million annual minor overhaul.

LECHEE, Ariz. - Jeff Lane's job as a pipefitter and welder takes him all over the country, from California to Washington, D.C. But he says he likes it best when it brings him home to Page, Ariz., for a month or two every year.

The 33-year-old father of three is one of hundreds of Navajo workers who are at the Navajo Generating Station for this year's four-week, $16 million minor overhaul of the power plant's 800 megawatt Unit 3.

"It allows me to come home," Lane said. "When I'm traveling, I was never home. I never got to see the kids or I was never involved with any of their activities that I miss out on when I am working on the road. For the month or two during the minor or major, it allows me to be home."

Lane has worked the NGS overhauls for the past eight years. This year, he is the coal pipe foreman overseeing a crew of 11 men.

"The amount of work that's been done, that is involved in these outages, is tremendous," he said. "I have to hand it to my crew, you know. We're on schedule. I'm not behind or ahead. I'm right where I need to be."

Every year, the NGS overhaul is a time when skilled Navajo workers can be close to home and earn good money, Lane says.

He says his crew is happy to work 12-hour shifts six days a week.

In all, more than 800 professional and skilled workers complete more than 6,500 individual tasks over tens of thousands of man-hours that include disassembling, repairing, inspecting and reassembling various sections of NGS' Unit 3.

For the small city of Page, each overhaul is an economic boon during the winter before the tourists arrive, said Brynn Johns, NGS Cost and Materials Manager. Workers fill its restaurants and motels and spend money in its stores and gas stations, he said.

"It's good for the local economy," Johns said. "We bring a lot of people in during the off-season and we expose some of these people, such as manufacturer representatives from various parts of the country to somewhere they may never have been before."

"We love the overhaul. It is our staff's favorite time of year," she said.

Varner said when overhaul workers spend their money in Page businesses, it puts money into their employees' pockets so they can spend money, too.

"The economic boost that it brings to Page is very well accepted," she said. "Seriously, for my hotel and my staff, it's our favorite time of year. It just kicks off the year fabulously. I think everybody feels the economic upturn."

Each year, one of the plant's three units receives a minor or major overhaul where worn parts are inspected, maintained and replaced.

NGS is currently in a cycle of minor overhauls. Starting in 2015, the plant will begin a cycle of major overhauls with each taking eight weeks and costing $25-to-$30 million. Each unit is then completely taken apart and brought back to manufacturer's specifications.

Every morning, Mabey leads a 7 a.m. meeting of about 25 contractors, managers, engineers, inspectors, schedulers, and supervisors to monitor the overhaul's progress, problems and safety.

"Not only are we tracking ourselves but we're tracking our contractors to make sure they're working safely, too, because we don't want anyone going home hurt whether they're a Salt River Project employee or a vendor's employee."

Every meeting includes a discussion on safety. NGS is currently enjoying the longest period without time lost to an accident or injury in its 37-year history.

Daily progress reports show exactly what percentage of the overhaul work has been completed, hours worked, problems encountered and solved, and how much remains to be done.

"The tasks for a minor overhaul are now considerably more than they used to be," Mabey said. "On a major overhaul, we'll take the turbine apart where on a minor we won't."

NGS Maintenance Manager Shayne Jones explains that during a minor overhaul one of the power plant's three units is shut down so that preventative maintenance can be completed that cannot be done when the unit is running.

"An overhaul is an opportunity to get in there and inspect things and fix the items that need to be fixed," Jones said. "It's huge. This is what sets the stage for the next three years because we won't be back into this unit in this magnitude until 2015. So we have to make sure the work is quality work, the right work, so that we can maintain high reliability for the next three years."

The quality of the NGS maintenance program is what has made this power plant an industry leader in power reliability, providing consistent electricity production 24 hours a day, seven days a week.

He said the preventative maintenance program forecasts 10 years into the future and is the reason the power plant functions more efficiently today than it did when it first came online in the 1970s.

Durral Whitehorse is an NGS plant mechanic who has worked here for five years. Today, he and his crew of three carefully removed, took apart, cleaned by hand and put together a four-foot circular "T-8 bearing" - one of 11 - from inside the Unit 3 turbine, the heart of the power plant.

"What these guys are doing here is cleaning the oil deflectors, making sure the surface is flat, no nicks or burrs that can cause an oil leak," he said. "We measure these so they all meet specifications so we're good, and the oil deflector actually contains the oil within the bearing housing. This job we're doing here typically takes four guys 10 or 12 hours from start to finish."

Skilled workers like Durral Whitehorse, Jeff Lane and hundreds of others say NGS is both an economic and cultural anchor that allows them to practice their trades, earn an excellent living, and be close to home and their Navajo culture.

"Really there's no other job opportunities," Lane says. "Primarily, there is really nothing out there other than the power plant or the mine that you can really work on the reservation. This job allows Native American preference, it allows these guys to have that opportunity, a better chance of getting in."