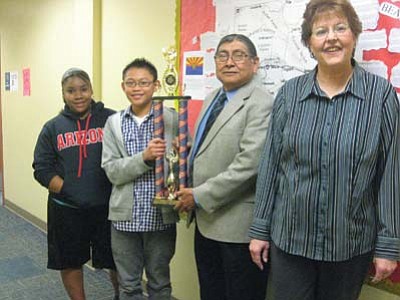 Bolus qualified for the state championship by winning the Hopi Junior High School title with Bryonna Morgan and Ariana Chapella also finishing among the top three for the Little Bruins. Morgan also competed in the county bee while Chapella served as the alternate. The state spelling bee will be held March 24. It will be televised on PBS, Channel 8, and the winner will go on to the national spelling bee in Washington D.C.

"It was really good," Bolus said about winning the county spelling bee championship. "The audience was clapping and I was on stage smiling because I was really proud."

Bolus said he was surprised to win because there was a Philippine girl from another school who was especially good at spelling. Bolus is Hopi and Philippine. He was extremely nervous this year despite being the runner-up last year as a sixth grader. By winning the county spelling bee, he will now compete at the state spelling bee. He said his brothers and father helped prepare him for the spelling bee.

"My teacher, Mrs. (Rita) Keith, said she was proud of me because I was the first one to win from Hopi," he said.

Keith was proud of Bolus and Morgan's performances at the county spelling bee.

"It is a daunting experience for them to stand on stage in front of a panel of judges and an auditorium full of spectators and maintain composure under such pressure," she said. "The bee was extremely competitive. The bee lasted almost three hours and went 19 rounds before the champion was determined."

Keith said spelling is important because it helps students understand the language.

"This is no small task considering most of our words are from other languages," she said. "Spelling is becoming a lost skill, one of the many, thanks to the computer age where spell check would appear to make it obsolete. But I would argue that taking the time to become a good speller means having respect for a language, how it is used and how it is written."

Keith said many of the words on the study lists are a lot more common than the words that were used at the county spelling bee. She hopes the students will use the words to expand their vocabularies and improve the word choices in their writing.

Keith said she loves serving as the sponsor for this event because it is an important experience for students in many ways. She said they not only become more aware and familiar with the English language, but they have the opportunity to be bold and proud as they stand on stage to compete. She believes this helps students develop poise and self-confidence.

Her advice to students who want to compete in the spelling bee in the future is to pay attention to language more, both spoken and written. The best spellers are avid readers so she encourages students to read as much as possible. Eighth grade students can also study to prepare for her bi-monthly spelling bees. This helps them become familiar with the spelling bee format and a little about the pressure they would face at the county spelling bee.

Keith also has ideas about how the county spelling bee could be improved. First, students should be introduced as they arrive on stage and tell what school they came from. Second, the pronouncers must be well prepared. She said there were some issues with pronunciations of words in foreign languages. Third, photographers should get a photo of the entire group, not just the top three winners.

"All students work hard to represent their schools proudly," she said.

"We had tutoring sessions for the students to learn pronunciations and spelling tips for the words they were studying," Keith said.

Morgan performed well, but missed the word "yacht." Bolus continued through 19 rounds, beating the second place finisher with the word "wedel" and then spelling the dutch word "mynheer" correctly.

Bolus said the students from the other schools, especially from Blue Ridge, congratulated him for taking first place. He said he is good in English and has straight A's because his dad taught him well.

He is the son of Gazel Bolus and Alban Naha.

"My parents are proud of me. They were really excited," he said.