More Than Frybread coming to Tuba City and Flagstaff this week 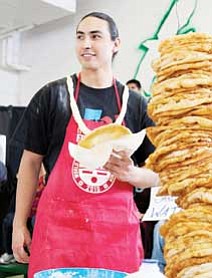 Tatanka Means stands next to a giant stack of frybread. <i>Submitted photo</i>

PHOENIX, Ariz. - Holt Hamilton Productions has just announced the Flagstaff and Tuba City premiere of the hilarious and award winning film More Than Frybread. Tickets are available at the door for all six shows.

More Than Frybread will be shown at 5 and 7:30 p.m. (MST) Friday at Moenkopi Legacy Inn and Suites in Tuba City. Catch the show 1 p.m., 3 p.m., 5 p.m. and 7 p.m. Saturday at Flagstaff Bordertown Dormitory/Kinlani Dorms.

The film tells the fictional story of the First Annual Arizona Frybread Championship competition between the 22 Native American tribes that reside within the state of Arizona. The 22 nations each send their local champion to represent their nation and compete for the coveted title of "Arizona Frybread Champion." The film closely follows five individuals from the Navajo, Hopi, Yavapai-Apache, Hualapai, and Tohono O'odham Nations as they journey from their homelands to the state championship held in the beautiful city of Flagstaff, Ariz.

The film has already had an amazing reception around the country in numerous film festivals and reservation screenings. The movie has played on reservation across Arizona, New Mexico, Utah, Washington, Idaho, Montana and into Canada with numerous others scheduled.

The movie's frybread competition was shot in Flagstaff at the Kinlani Dorm.

"The Bordertown Dormitory was a great place to shoot the film and worked perfectly to help us tell the story we wanted to tell. I love shooting in Flagstaff. I hope to shoot additional films there," said Director Holt Hamilton.