Escalade will transport visitors from the Grand Canyon's rim to the Canyon's floor
Project will generate $50-$95 million annually and will produce 2,000 jobs 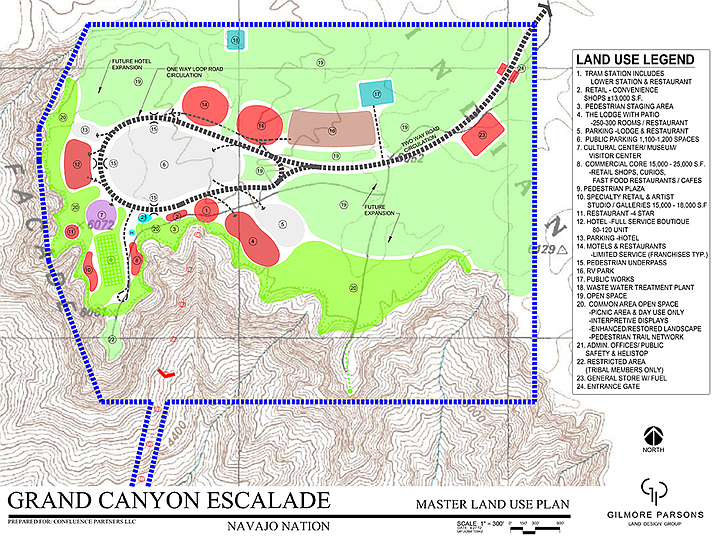 A map shows details of Grand Canyon Escalade. Below is the planned riverwalk. <i>Submitted photos</i>

GRAND CANYON, Ariz. - The Grand Canyon as we know it may never be the same again. A proposed tourism destination called the Grand Canyon Escalade, which features a Gondola Tramway that will take tourists from the rim of the Canyon down to the Canyon floor, is currently in the works.

Confluence Partners, LLC is the organization behind this massive project design. The proposed location for the Escalade is on the western edge of the Navajo Nation Reservation above the confluence of the Colorado River and the Little Colorado River, about 100 miles by road from Interstate 40 and Flagstaff, Ariz. Founding partner R. Lamar Whitmer originally came up with the idea in 1997 and has been working toward this goal in some form ever since.

"Within this development, we want to have a confluence of cultures," said Whitmer. "We intend to have an inter-tribal experience to capture the art and overall culture of Native American life."

Once on the Canyon floor, visitors will be able to stroll 1,400 feet on the elevated "Riverwalk" to the Confluence Restaurant, or to the Amphitheater and terraced grass seating area overlooking the Colorado River. According to developers, the Riverwalk on the Canyon floor will be elevated to minimize its impact on the environment.

However, most of the development will be located above the rim centered around a one way loop road, which in turn will surround a 1,200 space public parking lot. The loop road will be slightly elevated higher than the parking lot with pedestrian underpasses placed in key locations. Furthermore, the plans call for retail shops, a hotel, restaurants, motels/lodges, an RV park, administrative offices, a public safety building, and a general store with fuel.

There also will be restricted areas designated for tribal members only.

The development's other attractions will include a Navajo Cultural Center and an "Artist in Residency" program integrating Native American artists through the development's specialty retail/art galleries and the Amphitheater on the Canyon floor. Within the Navajo Cultural Center visitors can stop at the Navajo Nation Tourism Department's Concierge Center or attend a function in the 200-300 seat theater/auditorium. They can also peruse the Center's main exhibit of the culture and stories of the Dine' (e.g. Code Talkers, The Long Walk, etc.) and enjoy traveling exhibits from other museums or other Native American tribes.

The Grand Canyon already attracts more than five million visitors a year, but Whitmer and his associates feel that number will only increase with the addition of the Escalade.

"I think you'll see a rise in visitation because of increased interest," said Whitmer.

"It gives people another attraction to come see," added Deswood Tome, Special Advisor to the President of the Navajo Nation.

After three years of discussion with officials and interested parties, Navajo Nation President Ben Shelly and Confluence Partners, LLC signed a Memorandum of Understanding (MOU) earlier this year. The MOU negotiations have allowed the thoughtful and orderly refinement of the project, which in turn will provide for meaningful consideration by the local stakeholders, the Chapter, the Navajo Nation Council, and the Navajo President.

President Shelly has appointed a five-member stakeholders group to assist the Navajo negotiating team and ensure that the local residents' interests are represented. Tome is one of the five members of this stakeholders group.

"My job is to get the infrastructure going for this," said Tome. "I've had meetings with the Navajo Division of Transportation, the Navajo Hopi Land Commission Office, the community, and individual meetings where I sit down and explain what we're planning."

The region of the Canyon they plan to build on was also part of the Bennett Freeze area, which prevented Navajos on roughly 1.5 million acres around Tuba City from developing their communities or, in many cases, from even keeping their houses in repair. After more than 40 years, the Bennett Freeze was repealed in 2009. They also plan to restore and pave an access road that will run from Highway 89 due west to the Grand Canyon Escalade.

"This is an opportunity to rehabilitate this area with housing, with infrastructure, and with everything else we're planning to develop," said Tome. "So we're accomplishing two ends with this. And the Navajo is going to make the money back, and more, from this venture."

According to Whitmer, Escalade will produce employment and business opportunities for local residents, generate substantial Navajo Nation revenue (an estimated $50 to $95 million annually), and provide an opportunity for the Navajo people to share their culture and stories with dignity to a world in search of harmony and beauty.

At complete build-out, it is estimated Escalade will produce around 2,000 jobs. Several hundred construction jobs would be created as well, over the construction of phase one and future development phases.

In addition to the Chapter's Business Activity Tax, it is proposed that one third of the Navajo Nation revenue be dedicated to rehabilitation of the Bennett Freeze area.

"It's time to do something meaningful here," said Tome. "And this is the perfect vehicle. This is the first big step for the Navajo to showcase their Nation, and to share the Nation with the world."

The Bodaway/Gap Chapter, the Hopi Tribe, and the Grand Canyon National Park Service have all expressed concerns in reference to this project. The Park Service opposes construction of any kind below the rim of the Grand Canyon. The Hopis are fearful this development would impact their sacred sites or disturb existing prayer sites.

Whitmer said they are just beginning their public outreach, however. They have not had a chance yet to meet with the Hopi Tribe, the Bodaway/Gap Chapter, or the National Park Service.

Whitmer stated though that no Hopi sites will be impacted whatsoever in the development of this endeavor. In fact, Confluence Partners intend to have security and add protection to these specific locations sacred to any of the tribes, which as of now they do not have.

Whitmer predicts that Escalade will be able to accommodate 10,000-12,000 people a day and hopefully attract more than 1.5 million people a year. Construction of off-site and on-site improvements is estimated to take between 12-18 months. Whitmer anticipates Escalade beginning operations in the spring of 2015.