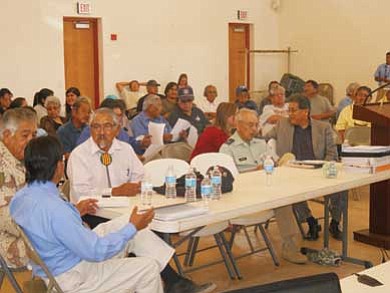 In the end, 11 council representatives voted to approve Nuvamsa's action item No. 065-2012 with four voting against.

The final vote approved Nuvamsa's action item, No. H-065-2012. It is specific to do several things. One, it rejects SB 2109. Two, it prohibits any further negotiation of SB 2109 by Hopi Chairman LeRoy Shingoitewa, Water Energy Team Chairman George Mase, the Hopi Water and Energy Team and the Hopi Tribal Council.

Three, it requires that Shingoitewa inform Kyl, Congress, the Senate Committee on Indian Affairs and the Department of Interior of the vote and final rejection by its tribal members. Four, it requires that if another water rights settlement comes before the Hopi Tribe, that it will only be decided on by members of the Hopi Tribe through a voter referendum (not the Hopi Tribal Council) after a full and open consultation and through the participation of the villages and tribal members.

The daylong session was not without controversy. Both Shingoitewa and Mase tried to introduce Mase's own opposing action item, No. 053-2012, which proposed to endorse and approve SB 2109 for the Hopi Tribe.

It was the swift objection from Kykotsmovi Council Delegate Nada Talayumptewa that Mase's action item was questioned and stopped.

Then the Hopi chairman wanted to exclude all media and non-Hopi tribal members from the Hopi Chambers. There was a large crowd of Hopis and interested non-tribal members who had been turned away at the front doors of the Hopi executive building because the Hopi Council Chambers is limited to only 40 community people.

Once the council meeting re-convened at the village of Hotevilla, there was another attempt by Shingoitewa to exclude all media from attending and reporting on the Hopi water controversy. Former Vice Chairman Clifford Qotsaquahu and former Hopi Tribal Secretary Mary Felter demanded the water meeting be transparent and informative. Another vote was taken by the Hopi Council to allow the media to stay and record, photograph and take notes on the high profile meeting. This vote was seven in favor to allow the media to stay and five against.

The final formal Hopi rejection of SB 2109 would have settled Hopi claims to the Little Colorado River in exchange for three Hopi groundwater projects.

"The bill is now dead and this vote from Hopi was a critical lynchpin for Kyl to get full approval to move this forward in Congress," said Sidney. "Because all parties must agree to this settlement for it to go forward, there is essentially no way for this to happen, and I'm hoping our Navajo neighbors and relatives can breathe a bit easier knowing how hard everyone at the Hopi and Navajo grassroots level has worked together in the past six months to get this disapproved by both Hopi and Navajo councils."