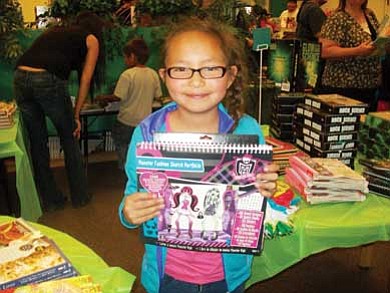 The annual Culture Night presented a whirlwind tour of the world by issuing passports to the guests as they signed in at the doors. After visiting each "country," participants received a sticker of that country's flag for their passport.

Kindergarten transformed their area into the South Sea island country of Samoa. Vines and flowers decorated a classroom. Visitors had the opportunity to make exotic tissue paper flowers and sample tropical foods such as pineapple, banana, and coconut. "Samoa" also hosted a special guest, a native of the real Samoa, Timoteo Peau Gasolo Ulima. Ulima is son-in-law to Alfred Clark, a family liaison with the Holbrook School District.

First grade showcased the Nile River and Great Pyramids of Egypt. Guests sampled typical Mediterranean food such as melons, hummus with flatbread, and dates. Senet, one of the oldest known board games in the world, was the activity offered to visitors. From there, guests traveled to Japan.

Second grade decorated with flags, watercolors, and fish prints. Sushi, sweet and sour chicken, teriyaki chicken, and crispy noodles were served, and the "tourists" tried their hand at the traditional Japanese paper-folding art of Origami.

Third grade featured a PowerPoint presentation of many of the architectural wonders and attractions of Greece. Guests enjoyed a Greek pasta salad and olives while adding color to images of Greek gods, goddesses, the Acropolis and other legendary sites in the country.

On to Italy with the fourth grade. Venetian gondolas ushered tourists into the room where they enjoyed Italian breadsticks with marinara, made flags of the country, and worked puzzles including one of the Roman Coliseum on the SmartBoard.

In India with the fifth graders, guests were treated to delightful curry rice in an environment of student work featuring maps of the country, fact sheets, and lovely illustrations of India's national bird the peacock. A puzzle of the Taj Majal was the featured activity.

On the way "home," students and their families stopped over in Canada out in the sixth grade classrooms. Prominently displayed was a student-made paper quilt showing Canadian geese, the Royal Mounted Police (Mounties), hockey, and maps of the provinces. Guests partook of maple cookies and hot French fries with gravy and cheese. A word search of things Canadian was offered for fun.

IWES hosted the Third Book Fair this school year, a Buy One Get One Free Fair on May 9-10. Although IWES students were in school for only two days that week, due to unused snow days, the book fair was a huge success. Teachers received $20 each for their Classroom Wish List to help build classroom libraries. Also, all 486 students received a free book from the book fair. Scholastic Dollars, profit earned from previous book fairs, were saved and used to purchase these books for students and teachers at IWES. Items also purchased through the book fair included pencils, markers, pens, erasers, hand pointers, reference books, creativity books, science, pre-school books and the most popular of all, the "Angry Birds Poster."

"With the end of the year and summer approaching so fast, I was so delighted and happy to see each student come through the book fair and shop around for books. I most enjoy watching their faces light up and have a chance to get books to take home and read. Also, and most importantly I would like to extend a warm thank you to my volunteers who helped make the book fair a huge success," said IWES Scholarship Chairperson Renee Smith.