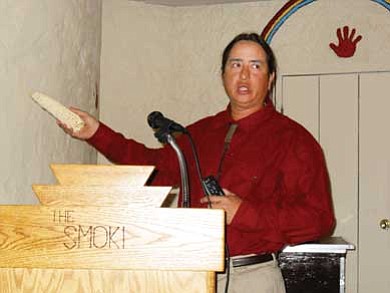 Michael “Kotutwa” Johnson of Kykotsmovi Village at Hopi has completed his written and oral exams at University of Arizona to formally start his final doctoral work in American Indian studies with an emphasis on natural resource policy and law this fall. Johnson is shown at one of his numerous requested guest lectures he has conducted on organic Hopi dry-farm methods. <i>Rosanda Suetopka Thayer</i>

KYKOTSMOVI VILLAGE, Ariz. - It's that time at the end of the school year. Native students are graduating at all levels, maybe deciding on a new job, moving away from the reservation for the first time to go to summer school or college or, in the case of Michael Kotutwa Johnson of Kykotsmovi Village, Third Mesa on Hopi, finalizing his pursuit of a doctoral program at the University of Arizona.

Johnson, the youngest son of Nancy and Col. Caleb Johnson of Kykotsmovi, has taken a long, windy road to get to his final academic goal. However, he doesn't regret any of his educational or work travel along the way.

Johnson has been accepted into the University of Arizona's Graduate Writing Institute this summer. This will help him finalize his final dissertation proposal for his doctorate in the American Indian studies field with an emphasis on natural resource policy and law, which he hopes to utilize in helping his own Hopi Tribe in national and international natural resource policy development.

Johnson was recently declared a formal doctoral candidate after completing his written and oral Ph.D exams at U of A and will now start on the actual writing and research for his final thesis.

Johnson has been back on the rez at Hopi for the past few weeks to start his annual planting of organic Hopi corn, beans, squash and melons at his earth-adobe studio, which he built himself over a series of seven summers, incorporating Hopi stone masonry and ancient Hopi house building principles.

Johnson said his parents have always encouraged him to go to school. His mother is a retired Winslow High School teacher. His father, Col. Johnson, left Hopi at a young age and enlisted in the Army to achieve the high rank of Colonel. He also studied at Princeton to complete an Ivy League university undergraduate degree.

His older brother David and younger sister Rebecca also went on to college. He was in a supportive environment where academics were concerned.

His Hopi grandfather was a farmer who instilled serious work discipline in Kotutwa's spirit, thought and everyday life. This has provided inspiration to attain his doctoral degree.

"I started off in my freshman year at Northern Arizona University in Flagstaff and I found I really didn't like college. I got discouraged enough that I ended up dropping out. I then knew I had to at least find some kind of job, so I started on road construction and temporary jobs," said Johnson. "As I worked with other people from everywhere and saw how education could really help me get to where I wanted to go in life, I could see the real value of a formal education and possibilities for myself.

"It was during this period that a group of educators from Israel came out to Hopi to teach Hopis how to grow tomatoes organically in 1993 and one of them really encouraged me to apply to Cornell, where farming organically was close to what Hopis do with dry farming and using ancient seeds," said Johnson. "So I went to NPC (Northland Pioneer College) and started on just the basics of college requirements. I got a guaranteed transfer from NPC to Cornell, and I started as an education major. But as the economic and academic requirements moved me along, I was able to get an internship with a non-profit organization called First Native Development Institute, which I worked with for two years before I decided I wanted to try for a graduate degree.

"I applied and was accepted to Pepperdine University in the public policy area and when I got done there, I worked for the National Resource Conservation Service for two years," said Johnson. "I worked really hard and was awarded a Sloan Scholarship for the University of Arizona. It was then that I met Dr. Joe Hiller who is now my academic advisor at the University of Arizona and he has been so helpful and supportive to me. Between Dr. Hiller and my grandfather, who both have taught me that you must work hard, nothing in life comes easy. I realized that I can do this, it's possible and it's possible for other students, too."

Johnson says that now, his approach to anything in his life is based on this realization - that if he is to provide any kind of student role-modeling, then he must "lead by example."

"I think sometimes, that Hopis forget that they have that inherent will to succeed because we all know life is hard on the reservation, there's no running water in many places and certainly in many Hopi villages, there is no electricity," said Johnson. "If I can build my own house with my own hands, using Hopi stone and Hopi technique, then anyone can do it. Hopis are the original founders of green technology. They used to, and many still do everything by themselves. It's hard work but they are so self-sufficient."

Johnson's adobe-stone cornfield studio house will be the featured highlight on a series of public tours that will be sponsored by the Nat'wani Coalition this summer starting on June 30.

There will be a corn roast sponsored by the Hopi Foundation and the Nat'wani Coalition, which will feature a guest lecture and evening of roasted corn in a traditional Hopi cook pit.

For more information on the tour or corn roast presentation at Kotutwa's studio home in Kykotsmovi, contact the Hopi Foundation or Nat'wani Coalition at (928) 734-2390.