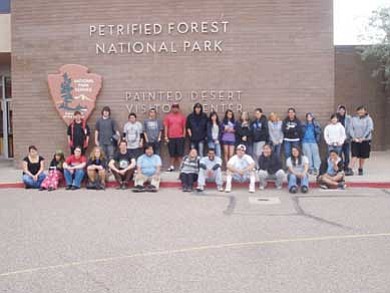 WINSLOW, Ariz. - About 30 students from Northern Arizona Academy (NAA) in Winslow made a trip to Petrified Forest National Park recently. Students were treated to a special introduction to the park by park rangers, given a natural and human history lesson, as well as informed about the geology and paleontology of the park.

Students and staff were also guided on a hike that lead to a special section of the park called the Dying Grounds, which consists of numerous ancient fossils, which students were able to search for, which was easy because they were everywhere. NAA students also had ample time to visit the park museum and visitor center, and go on a short interpretive hike that educated them on various aspects of the science and history behind this gem of northern Arizona.

This excursion was one of many field trips that students at NAA have participated in this academic year. One of the tenants of education at NAA is using the resources in our community to inspire the students to learn, and our students are fortunate to be so close to the many wonderful places right in our backyard.