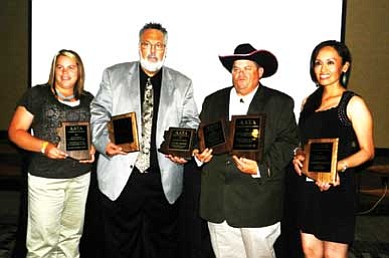 TUCSON, Ariz. - Teachers, an administrator and a business partner received recognition at the 2012 Arizona Agriculture Teachers Association (AATA) Awards Banquet held at the Westin La Paloma in Tucson on July 17.

Kim Yazzie, who teaches Agriculture at Valley High School in Sanders, was recognized as the "2012 Young Member of the Year" for the state of Arizona. The Superintendent Harry Martin of Kayenta Unified School District No. 27 brought home the honor as "2012 Administrator of the Year." Clyde McBride, also from Kayenta was honored as the "2012 Northern District Teacher of the Year" as well as the "Arizona Teacher of the Year." McBride also received the "Agricultural Advocacy" award. Second Chance Center for Animals from Flagstaff received the Outstanding Cooperation Award. Elissa McBride of Kayenta won the Ideas Unlimited contest for her teaching aide on bandaging a leg of a horse.

All of these winners will be sent to the National Association of Agricultural Educators to be evaluated for National recognition this spring.