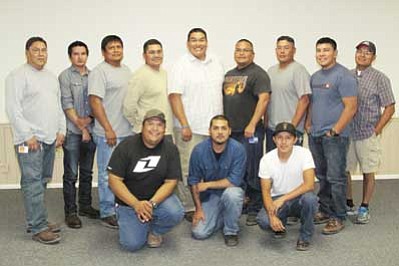 LECHEE, Ariz. - Eleven men have graduated from one of the most intense training programs in the energy industry to become the newest employees at the Navajo Generating Station (NGS).

The Power Plant Fundamentals School instructs new NGS employee candidates in every phase of the power plant's technical operation, procedures, history and safety. The curriculum of the seven-week long school is equivalent to a two-year, 21-credit college course.

Nicknamed the "Do or Die School," only successful completion qualifies a student for a regular, full-time position.

Asked why he would undertake such an effort for a job, Pepper Morgan, 33, of Window Rock, said his boy was his inspiration.

"I did it for my 10-year-old son, to give him a better life, provide him with more opportunities than I had," Morgan said. "I'm excited to start a new career and just raring to get to work."

The school is selective to get into and difficult to complete. Only about half who are interviewed are invited to participate. Then, only about half who begin successfully finish. Course work involves 10 hours a day of classroom lecture and fieldwork followed by at least two hours per night of additional study.

The course outline alone is 50 pages long. It includes sections on every aspect of the power plant's parts, equipment, procedures and operations; from electron theory to the railroad that delivers coal, from physics to the properties of superheated steam, from the Federal Reclamation Act of 1902 to the history of why NGS was built where it is on the Navajo Nation.

NGS conducts the Fundamentals School about twice a year. New courses are advertised throughout the Navajo Nation, Phoenix and Flagstaff.

The youngest member of the class, Myron Deel, 20, of Kaibeto, said that's where he heard about it.

"I read about it in the newspaper, the Navajo Times, and my parents told me I should give it a shot," he said.

At their recent graduation dinner, each of the students commented on the course's difficulty and the pressure they felt within themselves to succeed.

"It was intense for me, personally," said Wilson Laughter, 45, of Naschitti, N.M. "It was stressful because I have a family back home. But I'm looking forward to starting a new career. I worked for Navajo EPA for 13 years. Just like (course instructor) Tom Hull said, I want a little piece of the American dream for me and my family."

"Making safety a habit in the first year can have long-term positive benefits," Talbot said.

Black Mesa-Lake Powell Railroad Manager David Tso said that despite more than 540 employees working at NGS, workers know each other and have a good sense of teamwork and community.

"They are around each other at work and in the community," he said. "We all shop at the Safeway and Walmart. In Phoenix, you never see your co-workers because it is so big. Try to maintain that sense of closeness throughout your careers that you've found in this class."

Progress, continual training and opportunity for advancement are automatically programmed into their career paths, he said.

Tso said he began his career with SRP at NGS, transferred to Phoenix to gain more experience and get his bachelor's degree, and 15 months ago moved back home to LeChee to become an NGS manager.

While mechanical ability is helpful, some students arrive with little more than a fierce determination to succeed. As the course begins, students are told to expect to have to make sacrifices in order to successfully complete it.

Joseph Claw, a 33-year-old former Marine from Chilchinbeto, said he slept in his car three nights a week for the seven weeks, eating sandwiches and showering at work to save time to study.

"I live two hours away from here and I couldn't afford to drive back every day and every night," he said. "It's a lot of gas money and wear and tear on myself and the vehicle. It definitely helped that I was self-motivated. Every one of us was self-motivated, otherwise we wouldn't be here right now."

At the start of the course, students are taught how to study effectively to be able to learn the huge amount of material. However, many acknowledged that the key to their success was the teamwork they developed to help each other.

By the end, students progress from learning how individual power plant systems work to understanding how they function as an interconnected whole to produce electricity.

Omar Moreno of Tucson said it took him five years to follow his father-in-law's advice to apply to the school. He said because he had a job at a car dealership, he felt no need to try.

Then the economy bottomed out, he said.

"I was a mechanic before and it's real unstable out there," he said. "You can sit at the shop for 10 hours and only make two hours worth of work."

Moreno had moved to Page and was working at the Pow Wow Trading Post when a co-worker told him about the new NGS class starting, and by then he was eager to start. He said his father-in-law, Larry Wilson, who took the same course under the same NGS instructor, Tom Hull, followed his weekly progress and was proud of his success.

Like the other graduates with families, Moreno says he's relieved to have completed the school, set himself up for a career, and prepared the path for his family of four - soon five - for a better life.

Josh Begay, 33, said he already had a good job in Price, Utah, when he applied. Both he and his wife were fulltime students and he was set on a career track. But when he got an e-mail from his cousin saying he knew Josh always wanted to live near Lake Powell, he realized this was his opportunity for a big change.

"Here's a chance to live here, making good money, provide for your family," Begay said. "So I just decided to apply for it so we could live in Page."

Immediately after graduation, the graduates began a Safety Week, which emphasizes NGS's commitment to safety first. The training includes medical training in CPR, first aid, the Clearance Procedure, and the SMITH Driving course. A second week is devoted to Heavy Equipment Training that includes instruction on forklifts, overhead cranes, loaders and the man-lift.

Those assigned to the Maintenance Department are Joseph Claw, Antonio Smith, Myron Deel and Josh Begay.

Mike Woods, manager of New Employee Development, said NGS has hired 272 employees over the last 10 years - all of them Navajo or Navajo preference.