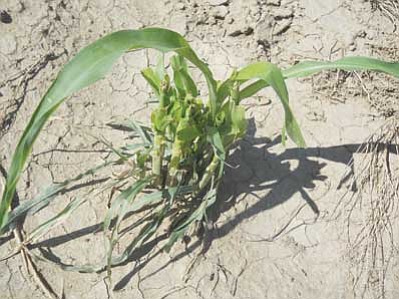 Hopi traditional corn plants planted by hand by Nathaniel Selestewa are able to mature only through natural rain moisture using the ancient dry-farming method. The plants were recently destroyed by Hopi cattle who wandered into farmlands looking for scarce vegetation. <i>Rosanda Suetopka Thayer/NHO</i>

HOTEVILLA, Ariz. - It's been three generations of traditional Hopi dry farming that includes planting by hand for Nathaniel Selestewa, Greasewood clan and his family at Hotevilla.

Selestewa's father Enos and his Kwa'ah (grandfather) before him were both farmers starting when the village of Hotevilla was first established in 1906 after the split from Old Oraibi on Third Mesa.

Selestewa's field, which is located about six miles off Highway 264 going west of Hotevilla towards Tuba City, has been passed down for three generations. This is something that Selestewa is very proud and very protective of, since he is responsible to provide his wife and family all the corn and beans that are used in traditional dishes and ceremonies year round.

This past weekend, Selestewa was upset to find that several wandering cows belonging to a cattleman from the village of Bacavi had crossed the area of rangeland immediately west to his farming area over both the grazing fence line and cattle guard. The cattle roamed into not just his cornfield, causing enormous damage to some already maturing crops, but also damaging the farming areas of his brother Elson Selestewa, his sister Charlene Kyasyousie and neighbor Richard Kayquoptewa.

Selestewa alerted the Hopi Rangers to the damage. Rangers contacted the cattleman who has since negotiated with Selestewa and the others to pay for all damages his wandering cows have caused.

But the cow damage isn't the only part of the land damage that Selestewa is worrying about.

Photos taken on July 18, show the deep vegetation destruction of even the indigenous protective prairie grasses and small plants in the grazing areas of D-6, which is near Howell Mesa on the Hopi side of the Navajo-Hopi fence line.

Over-grazing by Hopi owned cattle has created a barren desert area that once used to be traditional Hopi farming areas that were lush with small wildflowers, rabbit brush and cedar shrub trees.

Hopi cattle raising is a fairly new cash crop with the Hopi Cattlemen's Association being formalized only since the late 1940s after the formal Bureau of Indian Affairs cattle reduction program.

"It's really sad as a Hopi farmer to see your corn plants and beans being eaten by cows that come into the farm land from the other side of the fence line. I want people, like the Hopi Council and the higher tribal officials to become aware of what is happening to our whole land area," said Selestewa. "It's not just being destroyed by drought, but also years and years of ranching on D-6 area. The years of no wild grass have caused these cows to go searching for plants to eat in our farm areas.

"Our Hopi tribal leaders have been protesting things lately like the waste water use at Snowbowl or the tourist plans at Grand Canyon but these are not the only sacred areas of land," he said. "All of Hopi land is sacred....it's what the Creator gave us to use, to live on, but also we must protect and preserve it for our future."

Hopi Tribal Ordinance 43-Ordinance for the Control of Livestock and Grazing on the Hopi Reservation is the document that addresses all areas of large animal maintenance, impoundment, fees, regulation of cows and horses that are owned by Hopi Tribal members.

Proper impoundments may occur if "Livestock are found in areas closed to grazing, for conservation, for farming or other purposes."

Section F. - Causing Damage: "Livestock in fields or causing damage or having caused damage to private or public property on Hopi Reservation lands, not including normal grazing on range lands."

Selestewa was happy to read and see for himself a copy of the Ordinance 43 that would allow him to document his farming field damage and recoup some compensation, though he had to "replant" several areas of his field. He just hopes it will be enough time in this growing season to make up for the several rows of corn that were eaten to the nubs.

"Our Hopi tribal leaders and council officials need to wake up, get together and even our Hopi Cultural Preservation office, which is supposed to be preserving and helping to keep our culture and tradition alive, need to do something right now....to help heal our land," he said. "Then we can really dance for rain, for our sacred land, our corn and for our future children and grandchildren," said Selestewa.