Condor hatches on South Rim of Grand Canyon
Peregrine Fund estimates hatch date around May 2, condor expected to fledge in the fall along with second condor at Vermilion Cliffs 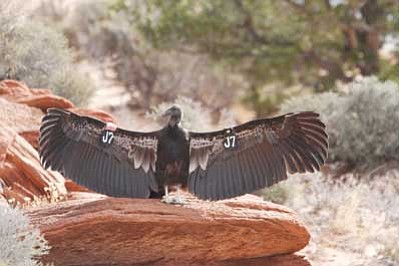 GRAND CANYON - Between the areas of Grand Canyon National Park and Zion National Park there are 76 condors in the wild rugged canyon-lands of northern Arizona and southern Utah. While this number may not seem that large, it's exponentially greater than when these great birds of prey were on the verge of extinction only three decades ago.

Two condors have hatched this year in northern Arizona, the most recent one at the South Rim of the Canyon. Chris Parish, condor program director for the Peregrine Fund, estimates a hatch date of May 2 for the region's newest scavenger.

The Peregrine Fund is a private non-profit group that is one of the main contributing organizations to a recovery effort program saving endangered species of birds. Their official mission is to improve local capacity for conservation, conserve habitat to preserve biodiversity, conduct scientific research and environmental education, and restore rare species through captive breeding and release.

The world's total population of endangered condors is 405, with a total of 226 in the wild in Arizona, Utah, California, and Mexico. Condors were reduced to just 22 individuals alive in 1982 when the program was begun to save the species from extinction.

"We've had 17 young [condors] hatched in the wild, and 16 of those have fledged," said Parish. "And then we're waiting for this one in the Grand Canyon and another one that's at the Vermilion Cliff National Monument. Those two should fledge in October or November."

According to Parish, it's hard to know exactly how long the lifespan is of a condor living in the wild but it is estimated to be over 50 years.

Parish has been with the Peregrine Fund since 2000, after working three years with the Arizona Game and Fish Department. As he would say it, he's "been in the condor game since 1997," after graduating from Northern Arizona University in Flagstaff.

Condor Cliffs, a division of the Peregrine Fund, wants to keep condors wild and wary of people for their own protection. Feel free to observe and take as many photographs as desired, but people should remember to keep their distance.

Parish urges people to visit the Condor Cliffs Facebook page as well to keep up to date on all condor news and correspond with others about their own personal experiences with the giant birds. The public is also able to post their own sightings and hear from members of the Peregrine Fund.

"It's an opportunity for the public to post their sightings, and we post little bits as well on what's going on with the birds and how things are going," Parish said. "It's good because then when somebody asks us a question and we respond to it, everybody benefits from the answer."

The condor was one of the first species added to the federal Endangered Species List in 1967. Prior to reintroduction, the last wild condor in Arizona was sighted just south of the Grand Canyon in 1924. The condor is the largest land bird in North America. The birds can weigh up to 26 pounds and have a wingspan up to nine and a half feet.

Research shows that lead poisoning from spent lead ammunition is the principle mortality agent for the condor flock, which forages largely on its own. State game and wildlife agencies in Arizona and Utah have initiated mitigating efforts to reduce the amount of lead available to scavengers. In 2008, the Peregrine Fund organized an international conference that focused on the effects of spent lead ammunition on wildlife and humans.

"People should be aware that it's a recovery program of an endangered species, and the recovery is coming right along," Parish added. "One of our problems is lead poisoning. They get lead from carcasses that they feed upon that might have been shot. Whether it be a hunting situation, where a feral animal was put down, or a domestic animal was put down.

"Anytime animals that have been shot with lead-based ammunition and left in the field scavengers like the condors can become exposed [to lead poisoning] by consuming those animals."

Parish said one of the highlights that comes to mind is the 90 percent voluntary participation by the hunting constituency in the Kaibab National Forest to aid in their preservation efforts. He added they are also looking to expand their outreach program into Utah because the birds are now taking an interest in that area as well.

As a non-profit, the Peregrine Fund incorporates anywhere from $600,000-$800,000 a year from the private sector, mostly from donations.

The best places to view the majestic condors are the South Rim of the Grand Canyon, the Navajo Bridge, Vermilion Cliffs National Monument, and Zion National Park. The best time of year to catch a glimpse is springtime in the Grand Canyon, even more specifically the month of May. Bring binoculars to see every detail on the large birds, but remember not to approach or feed any wild condor.

Up to three condors will be released to the wild in the Vermilion Cliffs National Monument in northern Arizona at 11 a.m. Sept. 29. The public is welcome to observe the release from a viewing area where spotting scopes will be set up and experts will be available to answer questions.

For additional information or to donate to the recovery program visit www.peregrinefund.org. Condor Cliffs is a sub-site of peregrinefund.org and also has a page on Facebook.

Three condors released at Vermillion Cliffs
Endangered condors to be released Saturday
Peregrine Fund: tough winter season for California condors in Arizona and Utah
Around the Rez: Sept. 27
Around the reservation: week of Sept. 6
Contact Us
Submit Questions, Comments, or Story Ideas