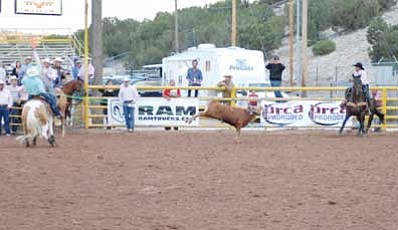 WINDOW ROCK, Ariz. - The Navajo Nation is a lucky charm....and that's all she wrote.

It was a double whammy for Derrick Begay and team roping partner Cesar de la Cruz of Tucson who won the team roping event at an impressive 3.9 seconds during the Navajo Nation Fourth of July Celebration and PRCA Pro Rodeo in the Navajo Nation capital on July 6. Their first place win was enough to garner $4,057 each.

Begay credits prayer, dedication, a lot of practice, family, and of course support from his growing Navajo fan base who cheered with thundering whistles and applause on a cool summer evening during the last day of the PRCA Pro Rodeo performance here in Window Rock, Ariz.

Pete Carr, owner of Dallas-based Carr Pro Rodeo who made his debut as the PRCA Pro Rodeo stock contractor, was equally amazed.

"For us, the experience was one that we haven't experienced before. The Navajo Nation rolled out the red carpet for our team and Commissioner Karl Stressman with an awesome welcome reception," said Carr. "We were all acknowledged and presented with gifts from the Navajo Nation. The planning committee and others involved with the rodeo made us feel very comfortable, like we've been friends forever. I feel like our team connected with them and that we developed relationships that will last a very long time."

Carr added, "I thought it was an outstanding rodeo, and I think the fans really enjoyed the production that we brought to the Navajo Nation. We had some great times in the timed events and some great rides. It seemed to me that the crowd was really into it."

Norma Bowman, Navajo Nation Fair Manager, said, "We were all very impressed with Pete Carr's rough stock. His team and livestock definitely put on an exciting rodeo performance. We were also very honored to have a very special guest visit the Navajo Nation, Mr. Karl Stressman who is the PRCA Pro Rodeo CEO. To have someone of this caliber watch the PRCA Pro Rodeo with us on July fourth speaks volumes. The Navajo Nation was honored to host an array of champions."

PRCA Pro Rodeo Commissioner Karl Stressman, said, "I was extremely honored to be invited by the Navajo Nation. The rodeo here on the Navajo Nation was great. You have some great competitors. It doesn't get any more western than to see Navajo cowboys and cowgirls. As PRCA Commissioner, I'd like to see how we can provide more opportunities for the Navajo youth and be active in the PRCA. In order for it to be successful, there will have to be commitment and investment by the Navajo Nation and the PRCA."

Frederick H. White, Navajo Nation Division of Resources Executive Director, said, "I just want to thank all the staff, volunteers, sponsors, and individuals who made our Fourth of July Celebration and PRCA Pro Rodeo a success. It took endless hours of planning and working behind the scenes by an array of talented people. And of course I would like to thank all of the Navajo people who participated and attended the various events that we hosted."

Other PRCA Pro Rodeo contestant winners were all-around cowboy Shank Edwards who earned $2,191; Austin Foss got the crowd screaming with a high ranking score of 89 points on Carr Pro Rodeo's Dirty Jacket - he received $3,848.; Clayton Tuchscherer, 4.1 seconds in steer wrestling; Jake Wright won in saddle bronc riding with 88 points to win $3,437; Jesse Clark won the tie down roping event 7.7 seconds and won $2,775; Mary Walker captured the barrel racing event at a winning time of 16.94 seconds and won $2.943; and Jacob O'Mara saved the best for last when he clinched the bull riding event with 89 points and received $4,119 for his efforts.

Two added events were included in the PRCA Pro Rodeo, which were wild horse racing and junior barrels. The wild horse race event winners were three individuals from Springerville, Arizona: Dion Nozie, Frankie Caddo and Nielson Roanhorse and the junior barrel racing event was captured by Faith Holyan of Tohatchi.