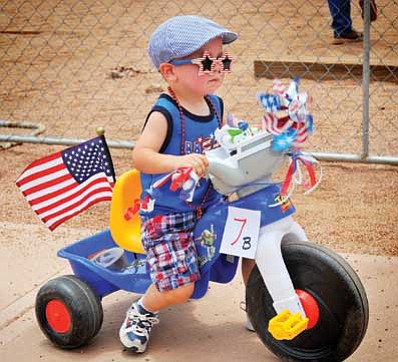 WINSLOW, Ariz. - The July 4 festival put on by the city of Winslow and Winslow Rotary Club had great attendance. The event was held at the Historic Hubbell building from noon until 4 p.m. The festival was cut short by about an hour due to high winds. A few canopies were blown down and dust began kicking up by the end. Earlier the festivities were blessed with a partly-cloudy day that made for a cooler than usual July 4. In anticipation of high heat, Winslow Ford loaned "Fest" their jumbo tent with misting included, allowing for cool and shade for any and all. Great plan for next year's "Fest."

For kids there were 10 attractions for fun or prize winning and around 10 food vendors for those in need of fuel. Things to do and see included a Horseshoe Tournament, Beer Garden, Bounce House, Dunk Tank, Car Shoe and Kids Patriotic Parade with prizes.

All proceeds from the festival went to support the evening's fireworks show at the Emil Nasser Stadium.