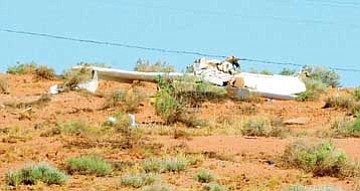 The wreckage of an experimental aircraft owned and operated by Joe and Sandee Tischler of Thousand Oaks Calif., sits northwest of the Winslow Lindbergh Regional Airport July 12. The plane crashed July 11. The crash site remains closed while an investigation continues. Coopertown Road is closed approximately one mile west of Coopertown. <i>Todd Roth/NHO</i>

WINSLOW, Ariz. - A plane crash in Winslow claimed the life of a California woman July 11. The woman's husband was injured when their homemade plane crashed while leaving the Winslow-Lindbergh Regional Airport. According to officials, the cause of the crash remains unknown and the case remains under investigation.

According to azcentral.com, the experimental aircraft, a Cozy Canard III, crashed approximately 300 yards northwest of the airport. Sandee Tischler, 62, of Thousand Oaks, Calif., was pronounced dead at the scene. Joe Tischler, 65, is reported to be in stable condition at Flagstaff Medical Center.