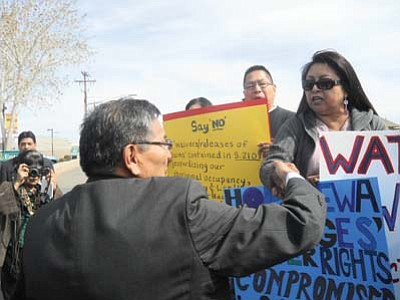 It was an historic day for Navajo water grassroots advocates, a day that had been long coming after six months of high emotional political turmoil, a serious public protest in Tuba City in April from both Hopi and Navajo tribal members, and numerous water education forums sponsored by the grassroots water advocacy in chapter houses and community buildings.

A final vote was taken by the 22nd Navajo Nation Council after a day long heated debate over water rights and its long ranging implications.

There was standing room only in the Navajo Nation council chambers with Navajo water community advocates coming as far as Flagstaff, Tuba City and varied New Mexico chapter areas to witness the historic discussion and final vote.

Afterwards, loud cheers went up and a press conference was held outside the Navajo chambers. Some tired and weary, but extremely happy, community members in attendance felt they had their voices heard by their chapter representatives by not accepting what they considered the limited terms of the Kyl-McCain water settlement that has been the focal point for months of heavy community debate.

Even at the final end of the discussion in chambers, Navajo Nation water rights attorney, Stanley Pollack tried to assure the council, "that there is no harm in the council making a counter offer that they felt could meet the needs of the Navajo Nation" and tried to remind the council that when he and Navajo President Ben Shelly had met with Kyl and McCain prior to the final vote, that they had both assured Shelly and Pollack that "if the tribe was not happy with the final terms, that they had the right to re-negotiate."

This formal council vote from the Navajo Nation Council puts a stop to congressional legislation to move it forward, since further movement needed the blessing from both the Navajo and Hopi Tribes.

Councilman Russell Begaye from Shiprock who opposed the water settlement said, "We as Naataanis' (leaders) decide what is best for us, not outsiders, not our attorneys, not corporations."

But Lorenzo Bates, council delegate from Nenah'nezad/Newcomb/San Juan/T'iistoh Sikaad/Tse Daa K'aan-Upper Fruitland who voted in favor of the settlement said, "this is the only way we are going to get safe and clean household water for the Navajo people and if we oppose this settlement, there is uncertainty of what will happen in the future."

The LCR settlement act proposed about $300 million in household water projects for both Hopi and Navajo communities. Many tribal water advocates felt the settlement had no firm commitment or reliable trustworthiness of promises from Congress or sponsoring senators Kyl and McCain.

Navajo water community activist Ron Milford, who is a full-blooded Navajo tribal member, has been one of the most highly profiled advocates against the water settlement for both the Hopi and Navajo community.

"We are really grateful to the Creator for providing guidance and strength throughout this grassroots campaign to save our water for our people," Milford said following the vote. "The rest was up to us. We had limited monetary resources but tons of determination and perseverance, personal professional skills, which we used as we went about educating our people about Kyl-McCain's ill-conceived bill and the terrible injustice the settlement if approved would bring. The difference between what we set out to do and President Shelly's professional and tribally funded public relations campaign was, we had the truth on our side. Fortunately, our Nation and the future generations to come, our legislators listened to the will of the people and voted the settlement down-a settlement that was designed to benefit the corporations and the lavish, wasteful lifestyle of Kyl and McCain's valley people... not the Navajo or Hopi Nation."

Don Yellowman, executive director of the Forgotten People's Organization in TubaCity was one of the principal grassroots water organizers on the western side of the Navajo reservation against SB 2109 and the settlement act.

"On February 29th, 2012, the Forgotten People hosted a "Water is Life, Water is Sacred" forum. During the planning of our event, Senators Kyl and McCain introduced S2109 LCR Settlement of 2012," Yellowman said. "We asked key people who presented at the forum to stay after the conference to discuss it to help further understand the language and intent it contained. This Tuba City meeting launched the formation of "Coalition of Water Warriors" that consisted of both Hopi and Navajo activists from all areas of grassroots, including former tribal leaders, educators, scientists, media, lawyers and otherwise informed local people with past experience in water settlements. The goal of these "Water Warriors" then became to educate their own community people and their council delegates and anyone else who would listen about tribal water value and legacy. It is to their credit that this Kyl-McCain bill was turned down... this victory really came from the Hopi and Navajo community people."

Hopi and Navajo grassroots water advocacy groups are planning a full-on "Hopi and Navajo Water Appreciation Day" in the coming weeks, to be held in Tuba City, that willfeature live music, potluck food and an "open mike" to talk about water and its significance to both tribes, culturally, environmentally and economically.

Plans for this "Hopi Navajo Water Appreciation Day" will be announced publicly soon.