Fred and Mary: An Unconventional Romance opens this weekend
Play focusing on architect Mary Colter and artist Fred Kabotie runs July 6-8 and 13-15 at the historic Elks Opera House in Prescott 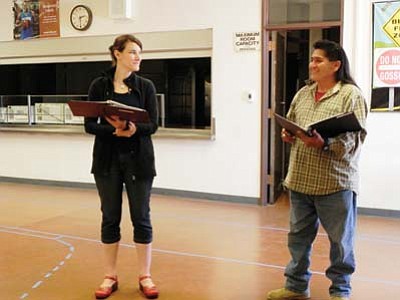 PRESCOTT, Ariz. - As the Arizona Centennial celebration marches on, the world premiere of the play "Fred and Mary: An Unconventional Romance" will open this weekend at the historic Elks Opera House in Prescott.

Straddling the border between historical and alternate realities, their story is interwoven with the beauty and culture of the indigenous people of the Southwest. Among the most vibrant examples of their vision are those at the Grand Canyon - buildings such as the Hopi House, the Watchtower, Hermit's Rest, and the Lookout Studio; which will be shown on stage through projection and lighting effects.

Hopi artist and painter Filmer Kewanyama steps into acting for the first time to play Fred Kabotie, a Native artist who worked with Mary Colter on the Watchtower. Working with Kabotie and other Native artists, Colter recognized the Southwest's first people by introducing indigenous themes in her designs. Visitors to the Watchtower today continue to be awed by Kabotie's extensive wall paintings and remarkable sand painting, which dominates the central floor.

After arriving in Prescott, playwright Micki Shelton found Kewanyama through his art two years ago and upon meeting with him discovered that as a young child he actually new Kabotie.

"Fred Kabotie is from the same village that I'm from, Shungopavi on Second Mesa," said Kewanyama. "My dad was a silversmith and an artist, and Fred Kabotie used to manage the Hopi Cooperative Guild on Second Mesa. Sometimes my father would bring me with him to help polish the silver, and that's how I would be able to see my father working and watch Fred Kabotie managing the gallery."

In addition, the opening scene of the play will include a dance specifically created for this production by Navajo dancer Toney Largo. The dance will include elaborate, colorful costumes that are intended to capture the audience's attention right from the start.

"Toney is creating a piece just for this play, and we are all so excited about it," said Kate Hawkes, director, producer, and production manager. "The play begins with all the characters and the audience watching this dance together. Unified and mesmerized by its beauty. That notion of time and space has no meaning at this point."

Hawkes stated that on the productive and administrative side to her role in the development of this play, is to make sure all the pieces come together and find the right people to help make that happen. According to Hawkes, the artistic part of what she does is direct.

"My job in that area [directing] has been working with the playwright, since it's still a new play, as well as find the right actors and do the steps by which you help people find their characters," said Hawkes. "I make sure they know where they need to be on stage, create any movement patterns, learn their lines, and sometimes just tell people where to stand."

Finding a current Hopi artist to play the part of a past Hopi artist is exactly what Hawkes had in mind when Shelton found Kewanyama and then tracked him down via Yavapai College. Kewanyama said at first he was nervous and hesitant to take the role because he had never done any acting or performance art before. But once he met with Shelton and started doing the readings, she and Hawkes convinced him to take the role.

"Kate [Hawkes] really knows her job about directing," said Kewanyama. "She makes us feel really comfortable with who we are and what we're doing. I just need to keep working hard at it and make sure I memorize all my lines. I'm still a little nervous though."

Kewanyama urges Native Americans to try and come see the play because Arizona has such a large Native population and this play helps capture the vital role Natives played in shaping the state.

"Fred and Mary: An Unconventional Romance" is being produced by the Elks Opera House Foundation to help celebrate the Arizona Centennial. The play covers almost the entire lifetime of Mary Jane Colter with three different actresses playing the architect.

"During this time period, even with many conflicts, there were still people who cared deeply about the Native culture and the environment. And who really made efforts to preserve that," said Hawkes. "I think what the play shows all of us is that you don't have to be the same as someone to appreciate where they're coming from."

"There are dynamic relationships in this play between men and women, non-Natives and Natives, and artists and pioneers. Remember, this is in a period when women didn't do what Mary Colter did. Women were not architects who were on the job site telling men what to do. It's a play I think that says regardless of where we begin, we can find things to respect and honor in people who are not like us," added Hawkes.

Hawkes urges people to come and enjoy a unique, original play in Arizona's oldest theater and learn something about the history of Arizona in a way that's never been done before.

Kewanyama currently has an exhibition on display at the Mountain Artists Guild in Prescott, part of the Native Creations show going on now until July 19.

"My paintings are all about Hopi," said Kewanyama. "The Hopi images are all based on the way I was raised and the ceremonies that I participate in."

Having served in the army, Kewanyama also competes in national artist competitions through the Veterans Administration (VA). One of his paintings he submitted just won first place and he will be attending the award ceremony in Boston this October.

Kewanyama loves discussing his art and explaining to people where his inspiration comes from and what each painting means.

"Everything I do has something to connect me with my way of life out home," said Kewanyama. "We're one of the few tribes that still cling to our old way of life in this modern world. We're still trying to do our ceremonies and our rituals. So I talk about it that way trying to educate non-Hopi and non-Native people on how we're trying to live today. Then maybe they can have a better understanding of what Hopi life is like."

When asked what the future holds in store for him now, Kewanyama simply joked his next logical step must be Hollywood.

One of the most famous Mary Colter buildings is the La Posada Hotel and Gardens in Winslow, which is now being beautifully restored by Allan Affeldt, according to Colter's original design. For Prescott residents, the hotel has become a destination on historic Route 66.

Tickets to the play for groups of 10 or more are $2 off, balcony tickets are $10 each. Regularly priced tickets range from $10 to $30 depending on seat location, student and senior rates are available. To purchase tickets, please call (928) 777-1366 or visit the Elks Opera House website at www.elksoperahouse.com. Sunday matinees play at 2 p.m. and all other shows are at 7:30 p.m.

Playwright Micki Shelton grew up in Scottsdale before moving to Southern California. She is a Resident Playwright at Theatre Artists Studio in Scottsdale, and a revered member of the Prescott arts community.

Director Kate Hawkes is originally from Australia and came to Sedona in 2008 after 21 years in Oregon. She is also an actor, writer, producer, and wellness coach for personal development.

For a full cast listing visit mickishelton.com and look under "Fred and Mary." For more information on Kate Hawkes visit wellnesswithkate.com. Filmer Kewanyama's art can be found in person or online.