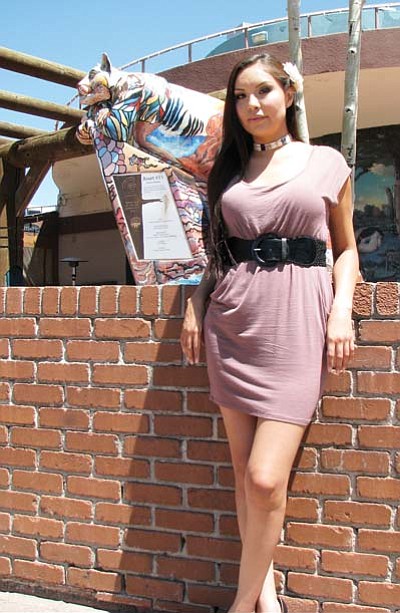 Sheila Hollow Horn is featured in an upcoming episode of Baron Ambrosia on the Cooking Channel. David Yankus/WGCN

The 26-year-old Flagstaff resident, who is also currently attending Northern Arizona University (NAU), will appear on episode eight of this season of Baron Ambrosia. The episode is entitled "Werefox of Phoenix" and will first air July 20 at 7 p.m. (MST) on the Cooking Channel, part of the Food Network family.

"When you hear the Cooking Channel or the Food Network, you tend to think of people showing you a dish or teaching you how to cook," said Hollow Horn. "But this is not like that, this has a story to it, it's a scripted show."

On his show, Baron Ambrosia takes viewers on various adventures all across the world involving delicious food, tasty recipes, and entertaining and unpredictable plot lines.

Hollow Horn was born and raised in Tuba City, Ariz. and is of Navajo and Lakota descent. Hollow Horn has been working in various Native American publications, magazines, and films since she was eight, including "Women of the Navajo." And as she steps onto a larger stage for the first time on a national television channel she couldn't be any more excited.

"It is such an honor to be a part of this," said Hollow Horn. "My manager Gloria [Dodge] knows a lot of casting directors and production teams, so she was able to get me this role. I auditioned for it, and I got the part."

Filming was done in Phoenix at the Heard Museum and Hollow Horn mentioned that there are plans to bring her character back. Hollow Horn added she is happy to be branching out into other forms of art and media, and hopes to reprise her role in future episodes.

"This opportunity has definitely already opened that door to meeting a lot of new people and making more connections," said Hollow Horn. "I've already received an offer to work with him [Baron Ambrosia] again, and I do plan to be on the show again. Baron Ambrosia is from New York City, and that's where we would be shooting next."

"I do keep in contact with the producers, the casting director, and Baron Ambrosia himself quite often right now because we are talking about filming again," added Hollow Horn.

In her episode, Hollow Horn plays the love interest of Baron Ambrosia, whom he intends to marry if he receives her father's permission. However, in order to receive that permission, Ambrosia must find a food delicious enough to convince the local "Werefox" to leave the village in peace.

According to Hollow Horn, she has future plans to continue mentoring young Native American girls who aspire to break into acting or modeling also. Hopefully, this is just another stepping-stone in a long, fruitful career.

After its initial airing on July 20, the cable channel will replay the episode featuring Hollow Horn several times over the next couple days. Check your local listings, television guide, or cable or satellite provider to find the Cooking Channel and be sure to tune in.

Sheila Hollow Horn can be found on Facebook, and currently has her own website in the works. For more information visit the Cooking Channel website at www.cookingchanneltv.com.