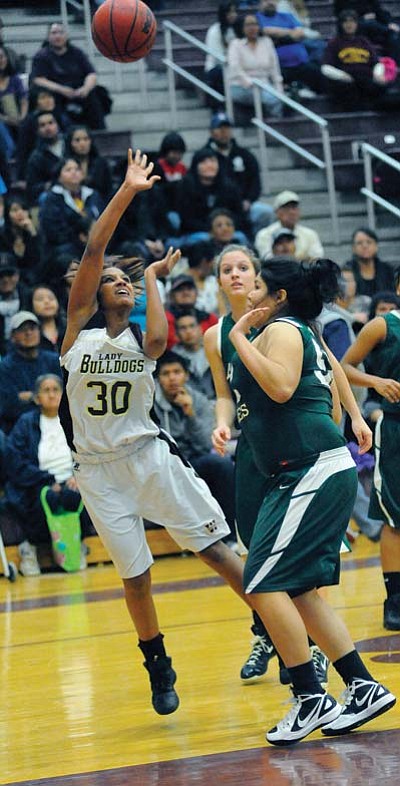 WINSLOW, Ariz. - The Winslow Bulldogs and Lady Bulldogs basketball teams won a pair of hard fought and competitive basketball games in Winslow on Friday. The margin of victory was less than 10 points in both games. The Winslow girls had edged Flagstaff in a thriller at Flagstaff earlier but the Winslow boys needed a win to avenge a loss to the Eagles in the earlier game.

The Winslow Lady Bulldogs defeated the Flagstaff Lady Eagles 60-52 in the first varsity game on Friday. The victory improved Winslow's record to an impressive 18-2 for the season and dropped Flagstaff to a 10-12 mark.

Winslow led 18-15 after the first quarter and had a double digit 35-25 halftime advantage. The lead was a commanding 52-34 after three quarters but the Lady Eagles cut into the margin in the final period.

The Lady Bulldogs were to be in Kayenta to meet the Monument Valley Lady Mustangs on Saturday and then host the Holbrook Lady Roadrunners on Tuesday. They will host the tough Page Lady Sand Devils on Thursday. Page is the last team to beat the Lady Bulldogs and the only Arizona team to do so.

In the nightcap the Winslow Bulldogs won a tight game 49-44 over the Flagstaff Eagles. The win was Winslow's second in a row and just the second since the start of the 2012 portion of the season.  It improved Winslow's record to 11-11 for the season.

The Bulldogs led 8-6 after the first period of play with Tyler Williams scoring all of Winslow's points in the quarter and the first 10 in the game. The Bulldogs were up 22-17 at the half and 35-26 after three quarters but Flagstaff had gotten within a single point with four minutes left in the game and the contest was decided in the closing minutes of play.

The Bulldogs were to journey to Kayenta to meet the Monument Valley Mustangs on Saturday. They were to host the Holbrook Roadrunners on Tuesday and will host the tough Page Sand Devils on Thursday. Only a pair of road games against Coconino at Flagstaff on Friday,, Jan. 27 and at Tuba City on Friday, Feb. 3 remain in the regular season.