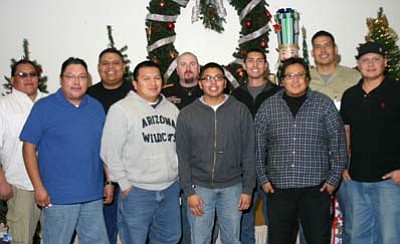 LECHEE, Ariz .- Nine men have graduated from the most intense entry training program in the energy industry to become the newest employees at the Navajo Generating Station (NGS), earning the title O&M 1.

The seven-week-long Power Plant Fundamentals School, a version of the program NGS originated 40 years ago to train its operators, instructs each new employee in every phase of the power plant's technical operation, procedures and safety.

The highly technical course, which is equivalent to a two-year college course, is nicknamed the "Do or Die School" because only successful completion earns a student a fulltime job at NGS.

"You made it through. That's a significant achievement," said NGS Human Resources Manager Tim Barney. "Be proud of yourselves. A lot of people aren't able to get through it. It takes a lot of dedication."

Tom Hull has taught the course for 25 years. He said this graduating class pulled together more than many in a long time.

"The skills that you brought to the school, the work that you did helping each other out, making sure that no one got left behind, the sacrifices that you made to get through the school and the work ethic you show, don't set those things aside," he said.

Hull said there is no down time during the program. Everything taught is important, and everything needs to be learned and remembered.

Ray Elshire, who was assigned to the Black Mesa & Lake Powell Railroad, said he found out how true that was.

"Forty-one years of life and I've done a lot of things," he said at the recent graduation luncheon. "All I can say about this is 'Holy Cow.' You aren't kiddin'. This was the hardest thing."

He said calamities, problems and doubt flooded him during the second week, leaving him wondering why he left his previous job.

But he said he's both pleased and proud to have made it through and to be working for NGS.

"I'm really looking forward to going to work on the railroad but I would have taken any job," he said. "I would have changed the tires on the bicycles. I feel real fortunate to be here."

NGS conducts the Fundamentals School twice a year. Each new course is advertised throughout the Navajo Nation and in Phoenix.

The course is difficult to get into and prospective students are told it is difficult to complete. About half of those who are interviewed are invited to participate. Then, only about half who begin are able to successfully finish.

While mechanical ability is helpful, some students come with little but a determination to succeed.

The program has been equated to a 21-credit college course, with 10 hours a day of classroom lecture and fieldwork followed by at least two hours per night of study group.

The curriculum outline is 50 pages long. It includes sections on virtually every aspect of the power plant's parts, equipment, procedures and operations; from electron theory to the railroad that delivers coal, from physics to the history of the Federal Reclamation Act of 1902 and why NGS was built where it is.

Along the way, students are taught how to study to learn the material effectively. But the key to their success is teamwork to help each other. By the end of the course, students have progressed from learning how individual systems work to understanding how they function as an interconnected whole to produce electricity.

Because NGS can be compared to an immense yet complicated tea kettle, students learn the properties of steam, heat and fuel down to their molecular levels, and how energy is captured and used.

Mike Woods, manager of New Employee Development, said NGS has hired 261 employees over the last 10 years - all of them Navajo or Navajo preference.

Another 56 employees have also taken the course.

"We feel we did a good job with you guys," he said. "We try to give you all the training so if in two or three years from now you're out here by yourself at 3 in the morning and something happens, you'll know what to do."

Those assigned to the Maintenance Department are Derek Duncan, Alvin Smith and Myron Whitehorse.

Often, current NGS employees with professional skills are encouraged to participate in the program. Their knowledge and familiarity with NGS prove valuable to the new employees in training.

Another who went through the school is NGS mechanical engineer Franklin Mallahan, whose experience assisted the new students succeed.